Springtime at the Estate 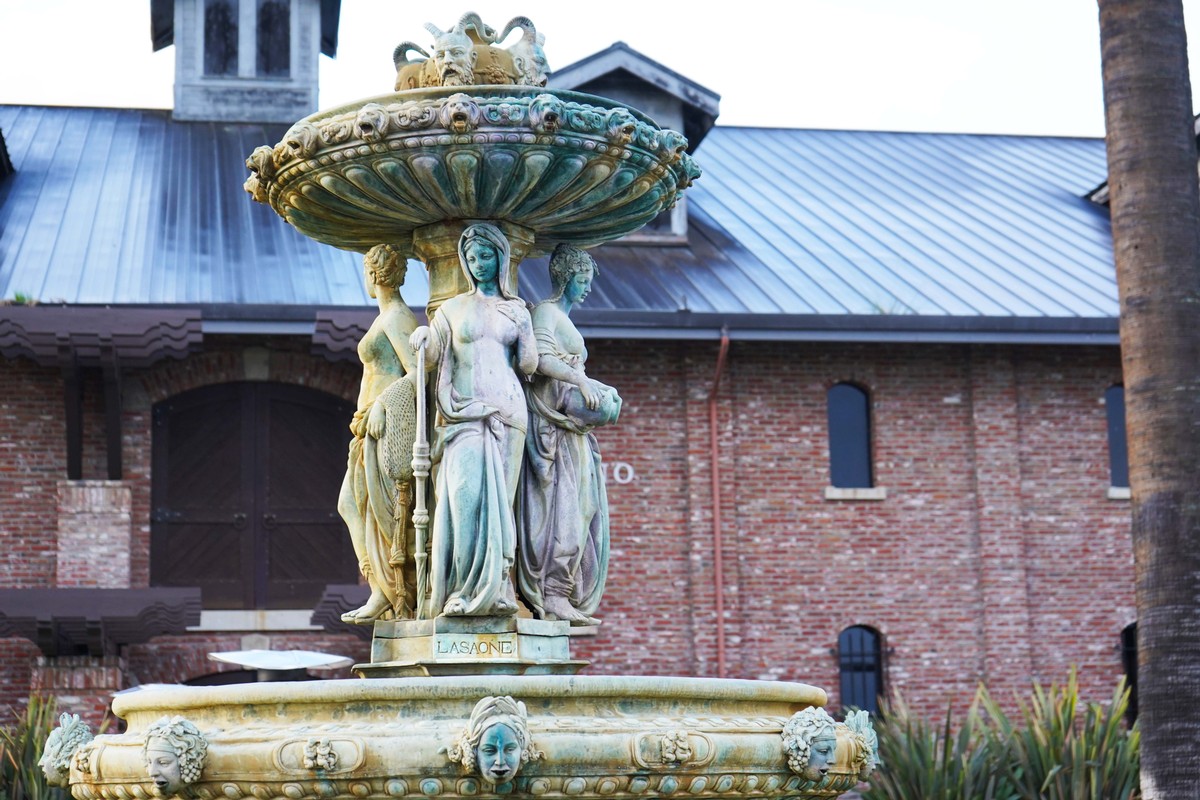 Every visitor to Rubino Estates is greeted by Lasaone, the maiden of spring. She faces the avenue leading to the Estate, welcoming everyone to dwell on the quiet majesty of natural beauty.

Stories about the transition from the cold season to the colorful growing season are hallmarks of human tradition and myth. With modern scientific understanding of the earth's axis and orbit, we're aware of the natural causes for springtime and the shifts in weather. Even so, we think it's beneficial to be enchanted by the change from cold and dormant to warm and colorful, observing the beauty of blossoms and sunshine with wonder. This week, we're looking into the myths and traditions of old to connect with timeless nature of what springtime brings to the Estate. 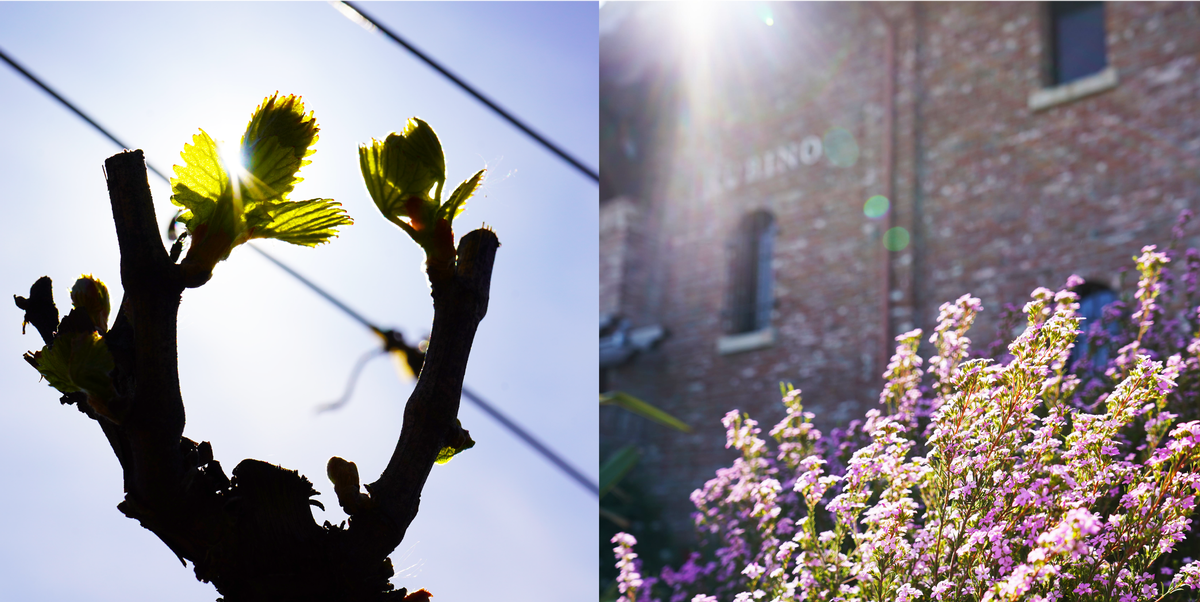 In Norse mythology, the god primarily associated with spring was Baldur, the god of light. Baldur was one of the most beloved deities within Norse myth. He was always depicted as attractive, and was praised for bringing light to springtime. At Rubino Estates, we appreciate the sunny days and pleasant warmth drawing the plants out of dormancy and waving goodbye to the chill of winter. As we enjoy these first days of spring, the cold days have reminded us of a story told by the Hopi people, which spoke of the Forces of Winter and Summer fighting over Blue Corn Maiden. This figure caused the crops to grow, so her presence was vital. When the weather would shift suddenly between warmth and cold, it was said that the forces of summer and winter were fighting over her. Eventually, summer would win and the crops could grow in safety. 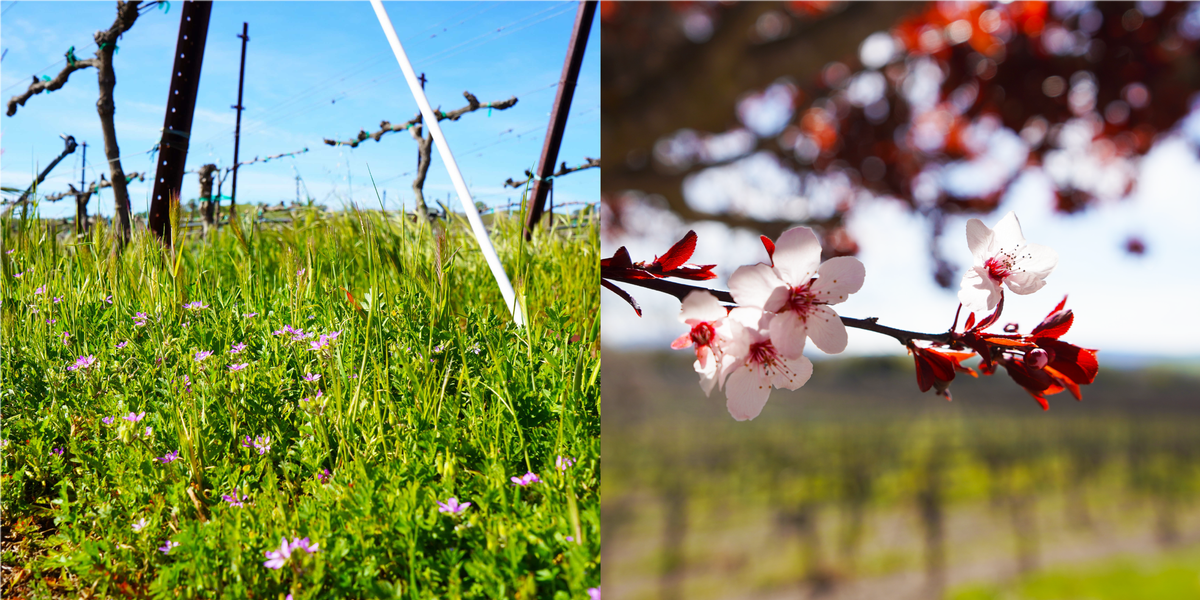 It's been a delight to watch the foliage around the Estate bursting into color. The determined weeds in between or rows of Petite Sirah have popped with tiny purple blooms, and this plum cherry tree overlooking our Sangiovese block has held onto its blossoms through multiple storms. In Greek mythology, the world would blossom when Demeter, the goddess of agriculture, experienced the joy of her daughter Persephone making her yearly journey out of the Underworld. For the time that Persephone would remain, the world would be fruitful, earning her the title of the goddess of spring.

Birds and Other Fauna

From tiny chicks to the easter bunny, spring is known to be a season for new life and precious animals. We've done some birdwatching on the Estate, appreciating the lively flocks as well as the solitary creatures. As we know, each one of these has a place in our ecosystem. Pictured above is a Eastern Bluebird, perching on our Zinfandel vines, as well as an American Robin, the family of which has taken up residence in one of our pepper trees. In Welsh folklore, the goddess of spring was named Blodeuwedd, meaning "flower faced." She was known for following her own rules and doing as she pleased, eventually turning herself into an owl to escape responsibility. Though nearly impossible to spot, our vineyards are also home to many owls who patrol majestically from dusk until dawn as well as being effective pest control. Like Blodeuwedd, spring can be finicky, but it is undeniably a season of great beauty.

The sun is shining, the soil is warming, and leaves are breaking out of their buds. The song of the sparrows echoes over the vineyard as the sun breaks through the clouds of the spring rain. Spring has officially arrived at Rubino Estates, and we're delighted to share it with you.

What's your favorite thing about spring? Let us know @rubinoestates on social media! 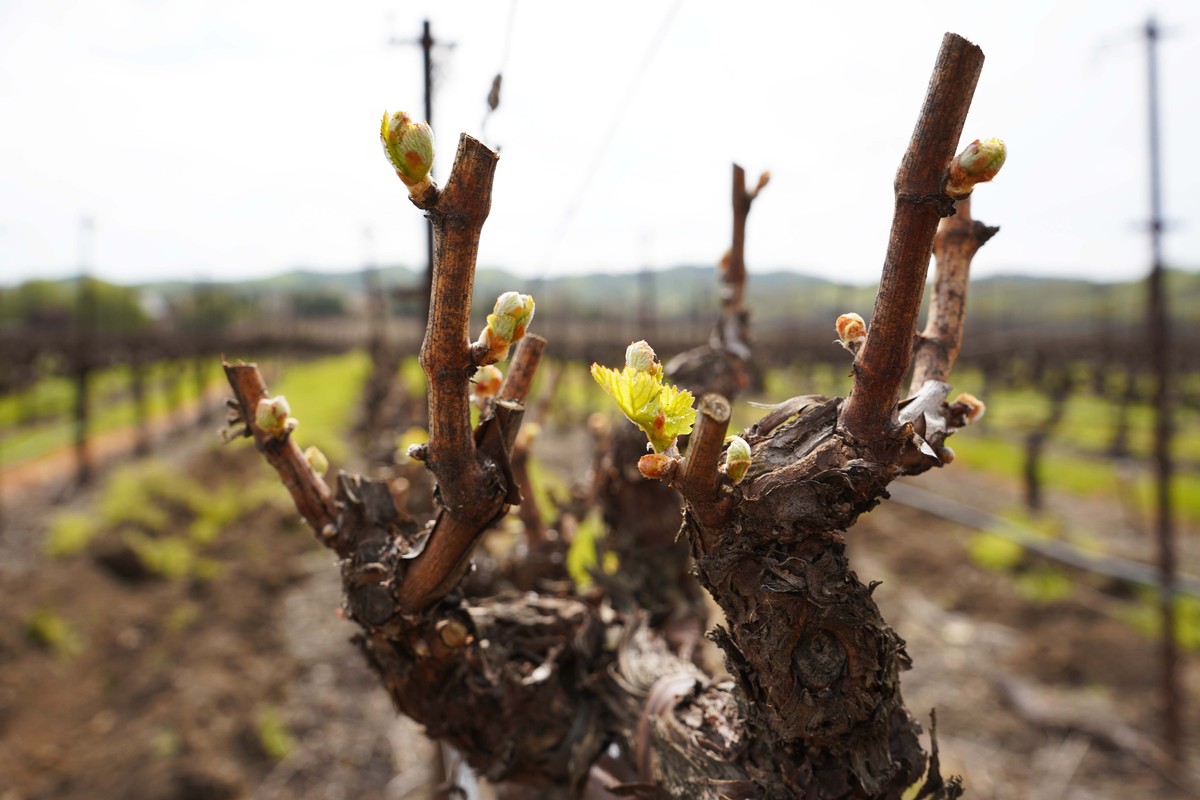 Here in Rubino's Estate vineyard, the new year of growing begins with an event called "bud break" or "bud burst." Throughout the dormant season, tiny nodes in the wood have rested, waiting to put forth a small, protected bud. As the weather warms and the vine begins to move nutrients up, the buds begin to swell. Generally, the vine is considered to have officially begun to break its buds when the tips of the leaves are visible. The timing of the bud break is very important, as an earlier break means a longer growing season but increases the likelihood of injury to the tender shoots from spring frosts. 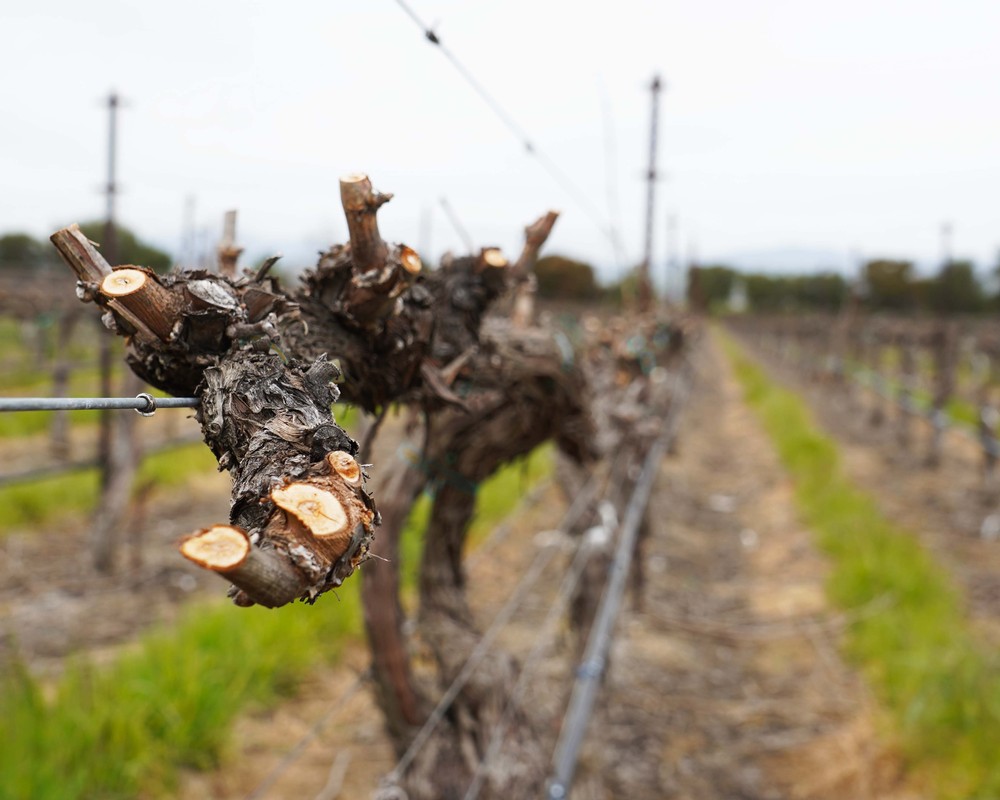 Even if the vines look dormant, the onset of spring sets things in motion underground. The carefully pruned Barbera vines shown above are getting ready to put out buds once the weather allows. Grapevines begin to send up the needed nutrients from their roots when the daily temperature is about 50 °F or above, though different varieties have different temperature preferences. 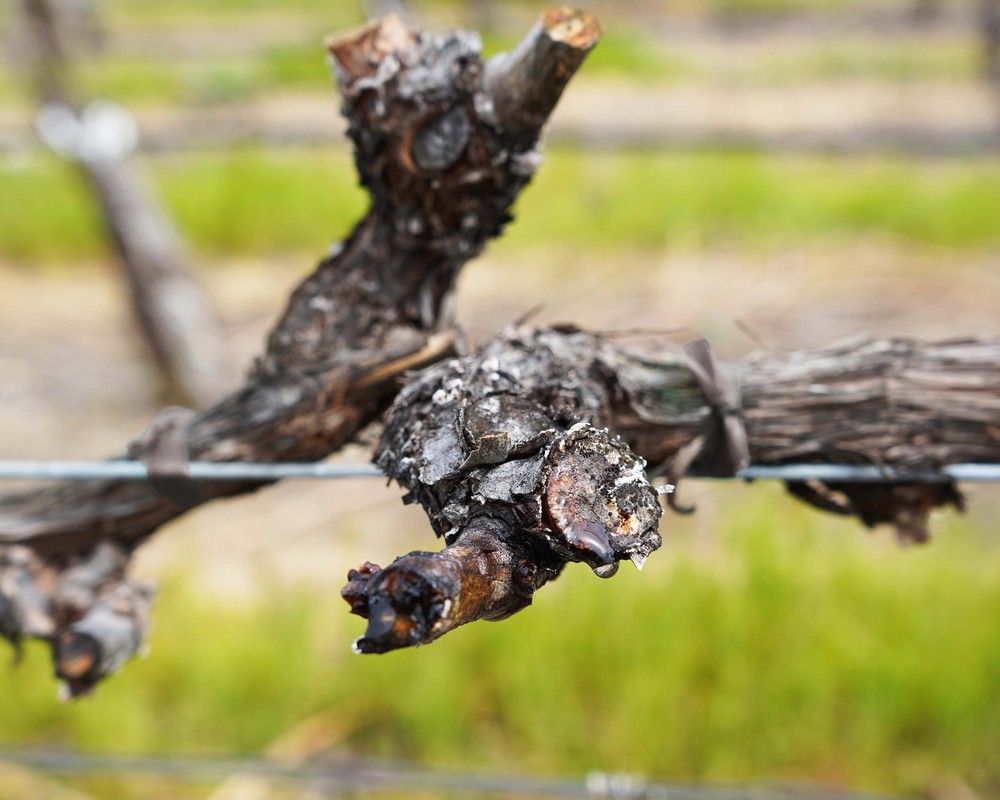 If the woody cane was pruned properly the prior season, you may see the vine undergo a process called "bleeding" wherein water is pushed up from the roots carrying organic acids, minerals, and sugars. On average, a single vine may expel more than a gallon of sap during this phase. Pictured above is a weeping vine of our Sauvignon Blanc preparing to begin the next phase of bud growth. 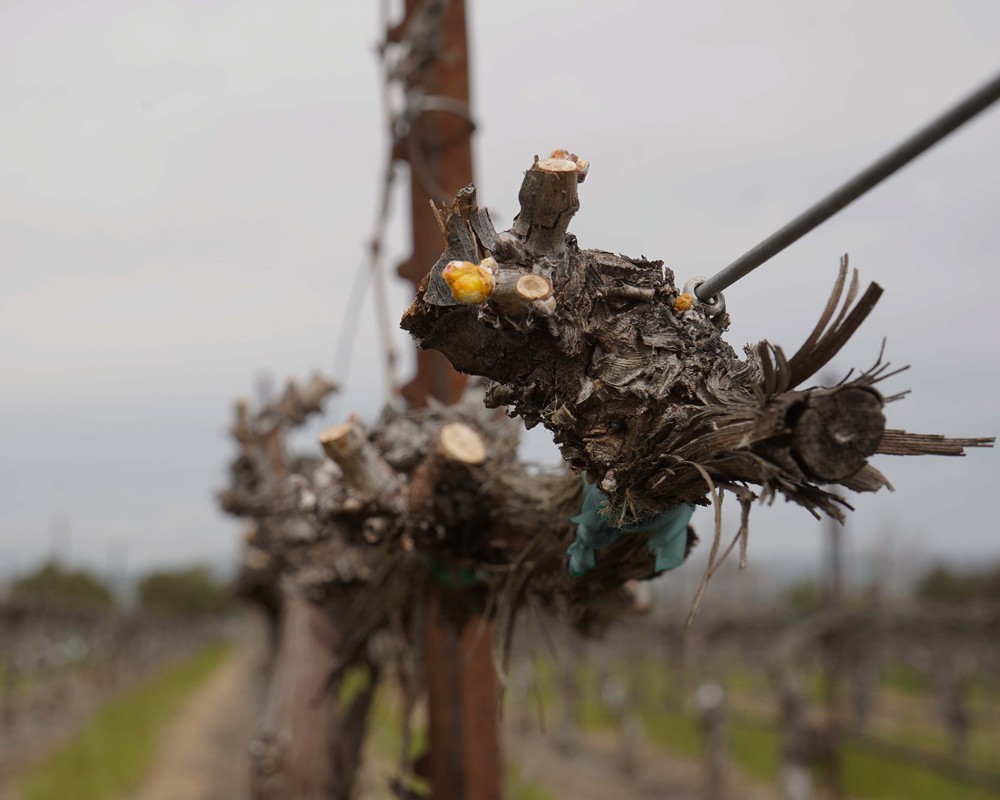 Tiny buds are the surest sign marking the end of the dormancy period. As long as the weather is warm, cloudy days can't stop this new Sangiovese bud from beginning to swell and bringing some freshness to the vineyard. The tender growth stands out in contrast to the aged cane, which was pruned in the prior season and is now ready to support the new development. 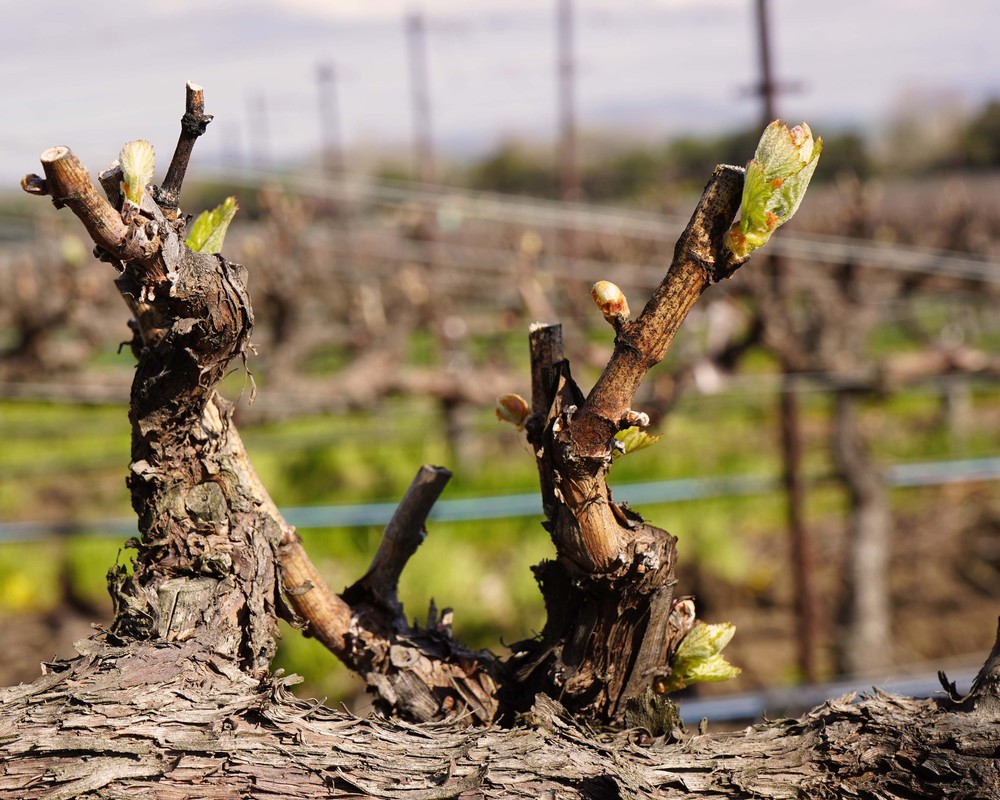 As the vines continue to turn their stored starch into sugar, their buds break and tiny leaves begin to unfurl. When enough surface area is exposed, the leaves will begin to perform photosynthesis. Pictured here are our Chardonnay vines, which begin the bud breaking phase earlier than other varietals. Slowly but surely, these infant leaves will provide increasingly more energy to the vine, aiding the continued growth process. Within a few weeks, the vines will be fully clothed in lush greenery.

We are excited for the season to come! 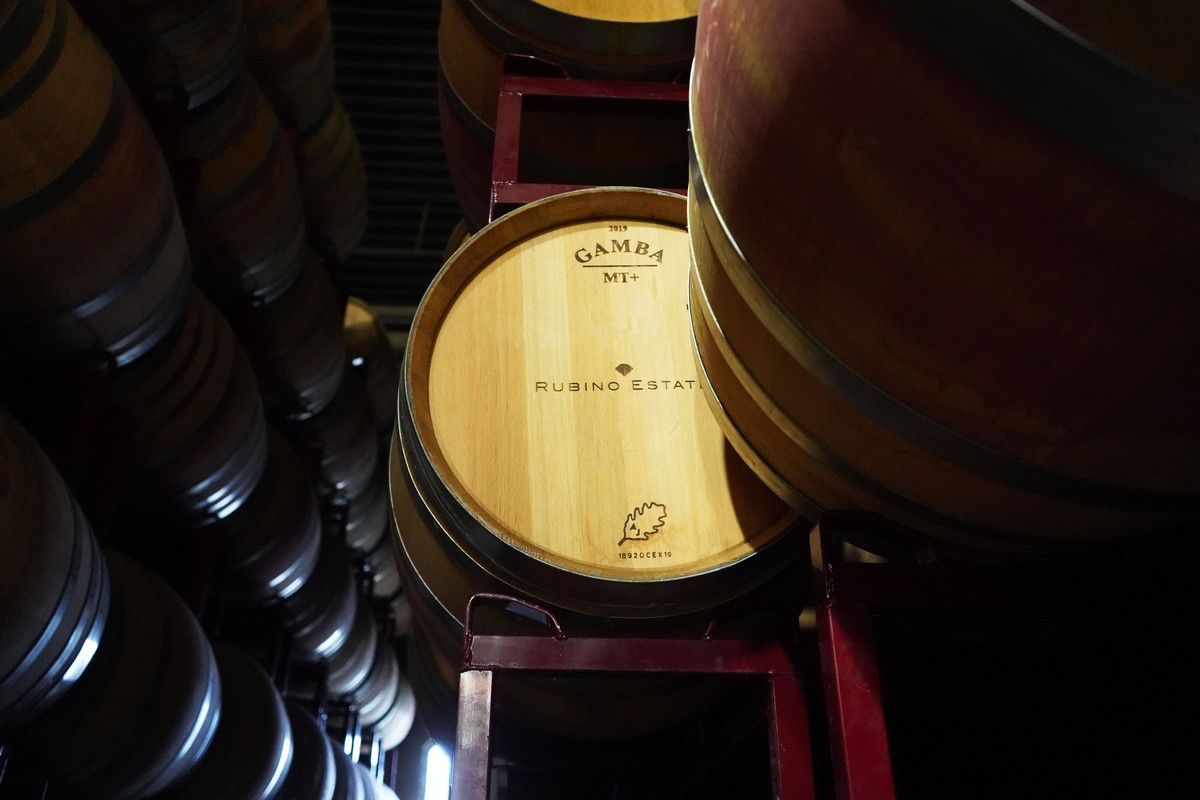 One of the greatest joys of winemaking is how picturesque the work is. From the vineyards, to the barrels, to the wine itself, we're surrounded by beauty here at the Estate. We are always looking for ways to protect and sustain the beauty around us. The average "lifespan" of the oak barrels we use to store and age the wine is about 5 years, though some barrels last as long as 10 years. When they are no longer fit for winemaking, they are full of potential for other practical and elegant uses. We offer our gorgeous retired barrels so they can be passed on to new purposes. A few of our favorite ideas for upcycling barrels are below! 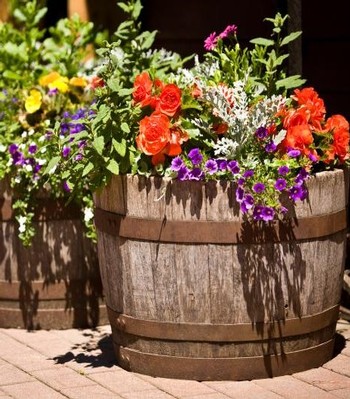 Barrel planters can be customized with so many shapes and layouts that you can plant a huge range of foliage. Whether you’re planting succulents, pansies, kale, or tomatoes, there’s a setup that meets your needs. The simplest design of sawing the barrel half, either vertically or horizontally, yields two spacious, matching planters. If you're curious about more innovative layouts, click here for inspiration! 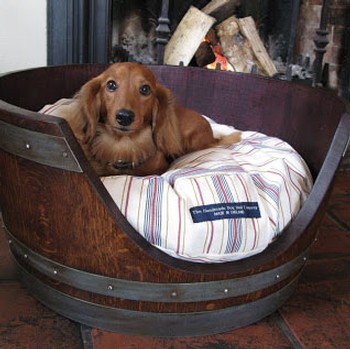 Pets are part of the family, so why not let them be wine lovers too? Put a plush bed in a classy, upcycled barrel from a local winery, and they have the perfect place to cuddle up  when they're dog-tired. This bed would be perfect for both cats and dogs, but make sure to measure—you don't want your big dog to spill out! There are more elaborate options for wine barrel pet beds ranging from little wooden caves to thrones. You can dream up a custom masterpiece for your furry friend!

We love this outdoor cooking must-have.The barrel has been transfromed into a combination food prep station and cold storage. The clever addition of a rack for grilling tools (using the slats cut out from the side of the barrel) and a set of wheels makes this even more stylish and practical. Talk about summer ready! The wine country flair is perfect for anyone looking to elevate their outdoor spaces. 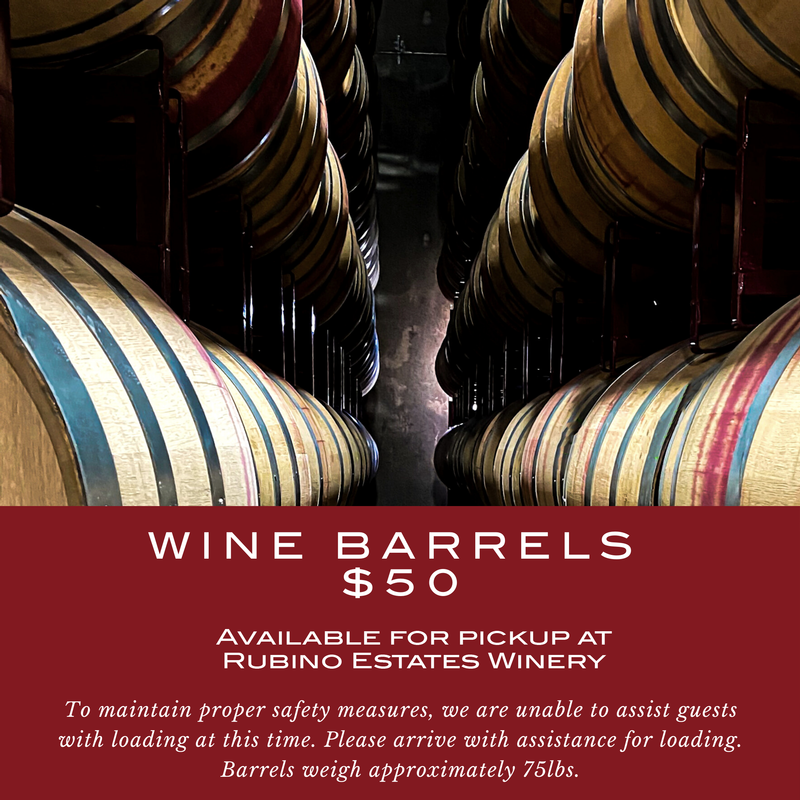 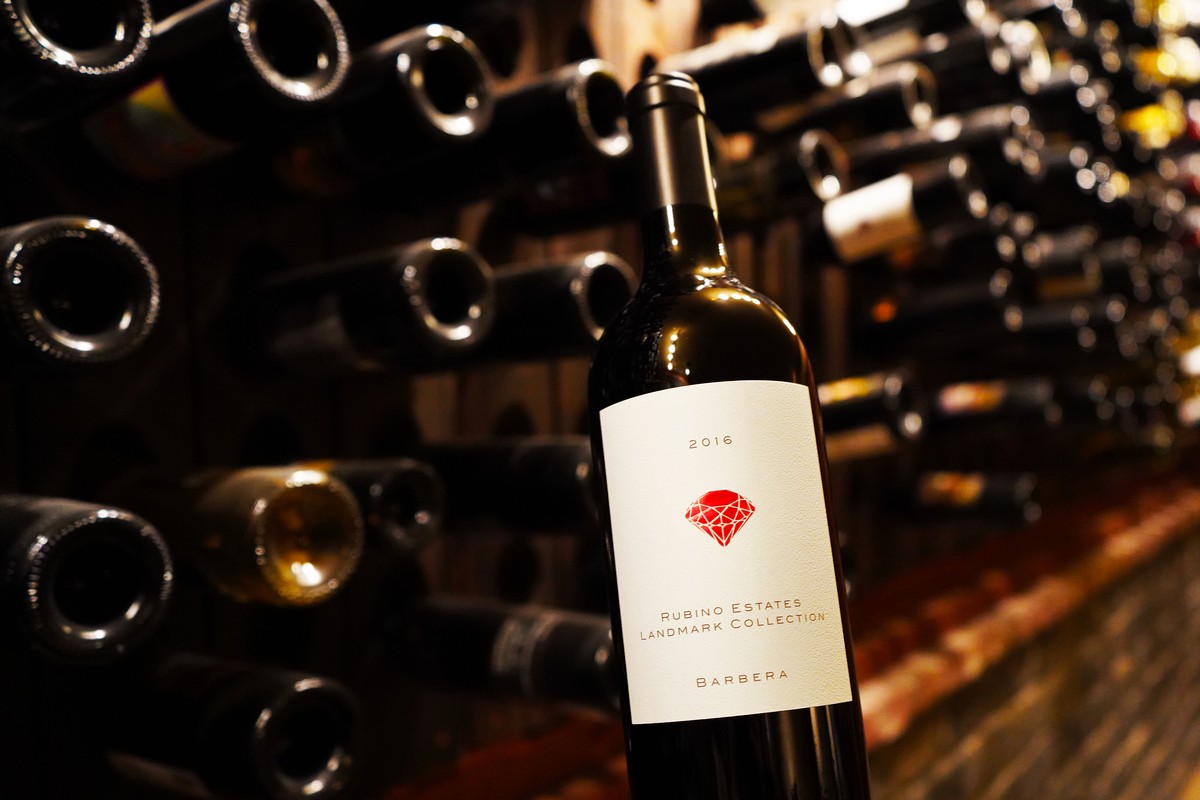 This week, we welcomed a new arrival to the tasting room: the 2016 vintage of our Landmark Barbera. When it comes to our Landmark collection, we've never met a bottle we didn't like. We're excited to share yet another superb vintage of this Barbera with our patrons and members. It is rich and velvety, boasting red fruit notes and a luxuriously long finish—sure to delight. Enjoy a taste from a wine flight here at the tasting room, or just open up a bottle! This wine is also sure to age well if you'd like to save it for a rainy day.

To acclaim the arrival of this new vintage, we're roasting up a savory pork shoulder in a Mediterranean style. The complimentary flavor profiles make for a delicious meal and a lovely evening. As a little bonus, our recipe calls for a dry white wine, which means plenty leftover to sip while we cook! 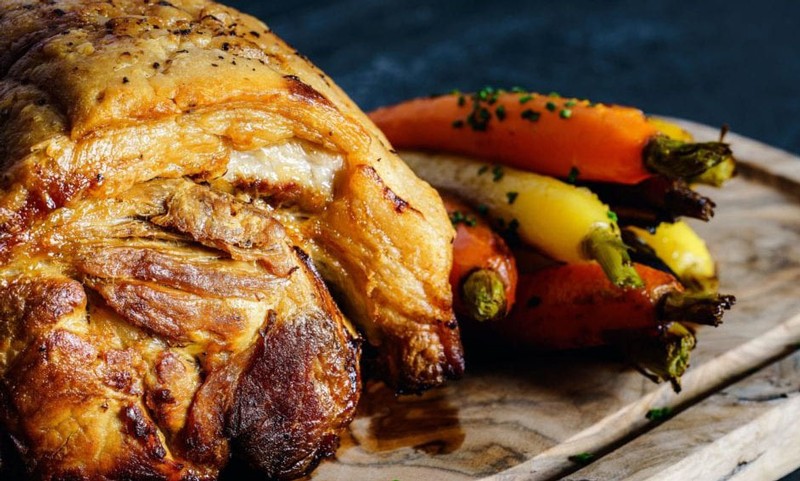 If we've inspired you, we'd love to know. Make sure to tag us on social media @rubinoestates with your favorite meals to pair!