What You Should Know About Chardonnay 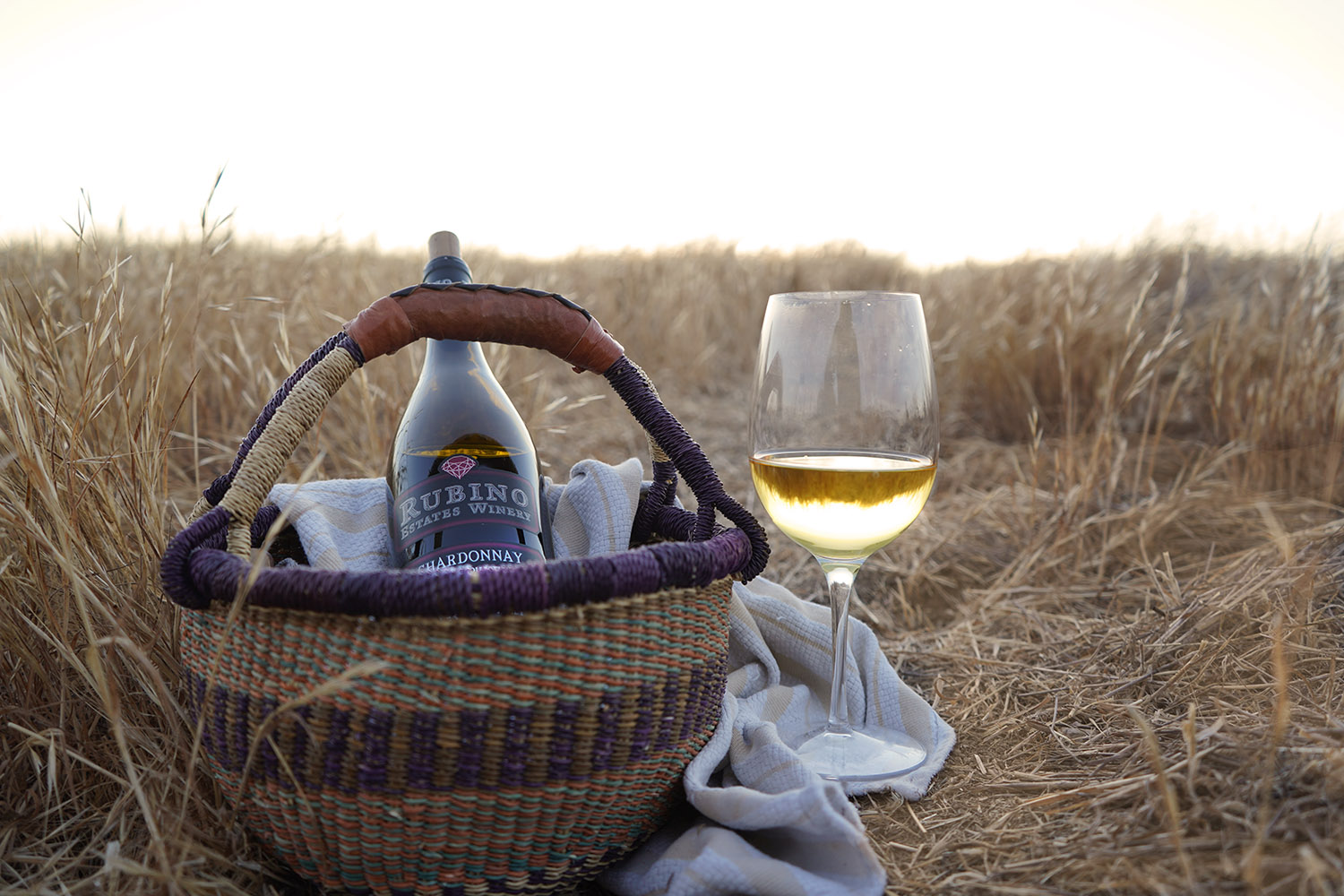 For all of June, we’ve been appreciating our Riserva Chardonnay, which was crowned our ''Wine of the Month.” As one of the most widely known and recognized white wine varietals, Chardonnay has earned its fame from its approachability and golden splendor. Some sommeliers consider the quality of an establishment’s Chardonnay to be a metric for guessing the quality of the winery as a whole. Despite its popularity, there’s a few things you might not know about Chardonnay—so read on!

The Old World. The Illustrious history of Chardonnay dates back at least as far as the Roman empire, when vines of a varietal called Gouais Blanc were brought from Croatia to mainland Europe. Gouais Blanc would eventually cross-pollinate with the French Aristocracy’s Pinot Noir, creating a robust descendant. The gorgeous golden-green of Chardonnay grapes was born from these vines. For many years, Chardonnay was grown alongside, blended with, and mistaken for pinot blanc. Chardonnay would not gain its own fame until later, partially aided by the particular use of Chardonnay in Champagne.

Californian Perfection. “New World” Chardonnay has a life of its own, with some of the best Chardonnay in the world growing in California. The first successful planting of Chardonnay grapes in California was right here in the Livermore Valley, and we’re proud to continue that legacy. Chardonnay thrives in California’s valleys, where blankets of coastal fog slow the ripening of the grapes and encourage flavorful, robust fruit. Californian Chardonnay exploded in popularity after the “Judgement of Paris” in 1976, where multiple Californian wines, including a Chardonnay, beat French wines in a blind tasting.

Global Spread. Though Chardonnay is now considered the most famous of the white wines, it comes in 6th place in terms of global acreage with around 520,000 total acres. It also comes in second place in terms of acreage for white wines, beat out by the Italian varietal Aivén. As far as global spread is concerned, however, Chardonnay is the winning vine. Virtually anywhere wine is grown, there is Chardonnay.

Person and Place. The widespread cultivation of Chardonnay makes for huge variety in what the wines can offer. It is referred to as “malleable” meaning that the taste of the wine is highly dependent on the style and work of the Winemaker, as well as terroir—the unique conditions of the place in which it was grown. When you sip a Chardonnay, some say you “taste the place.” The Winemaking process lends significant flair as well. A natural process called “malolactic fermentation” is used on some Chardonnay to create a smooth, buttery, and less acidic wine.

Cream and Spice. The use of oak barrels is the source of most of the Winemaker’s influence when crafting a Chardonnay. Some Chardonnays are fermented and aged in stainless steel, though oak lends iconic flavor and complexity. Sometimes referred to as the Winemaker’s spice rack, oak barrels, when used either for aging or for both fermentation and aging, can impart toasty flavors of vanilla, caramel, spice, cream, coconut, cinnamon, cloves, and more. After bottling, Chardonnay is delicious when young while still holding up well if aged.

If you think you don't like Chardonnay, don't give up on it! Don't be afraid to give it another try--likely, you just haven't found the right one for you. There's a bottle out there that's perfect for your palate and preferences.
If you're a fan of our critically-acclaimed Riserva Chardonnay, don't miss your chance on our Wine of the Month sale! 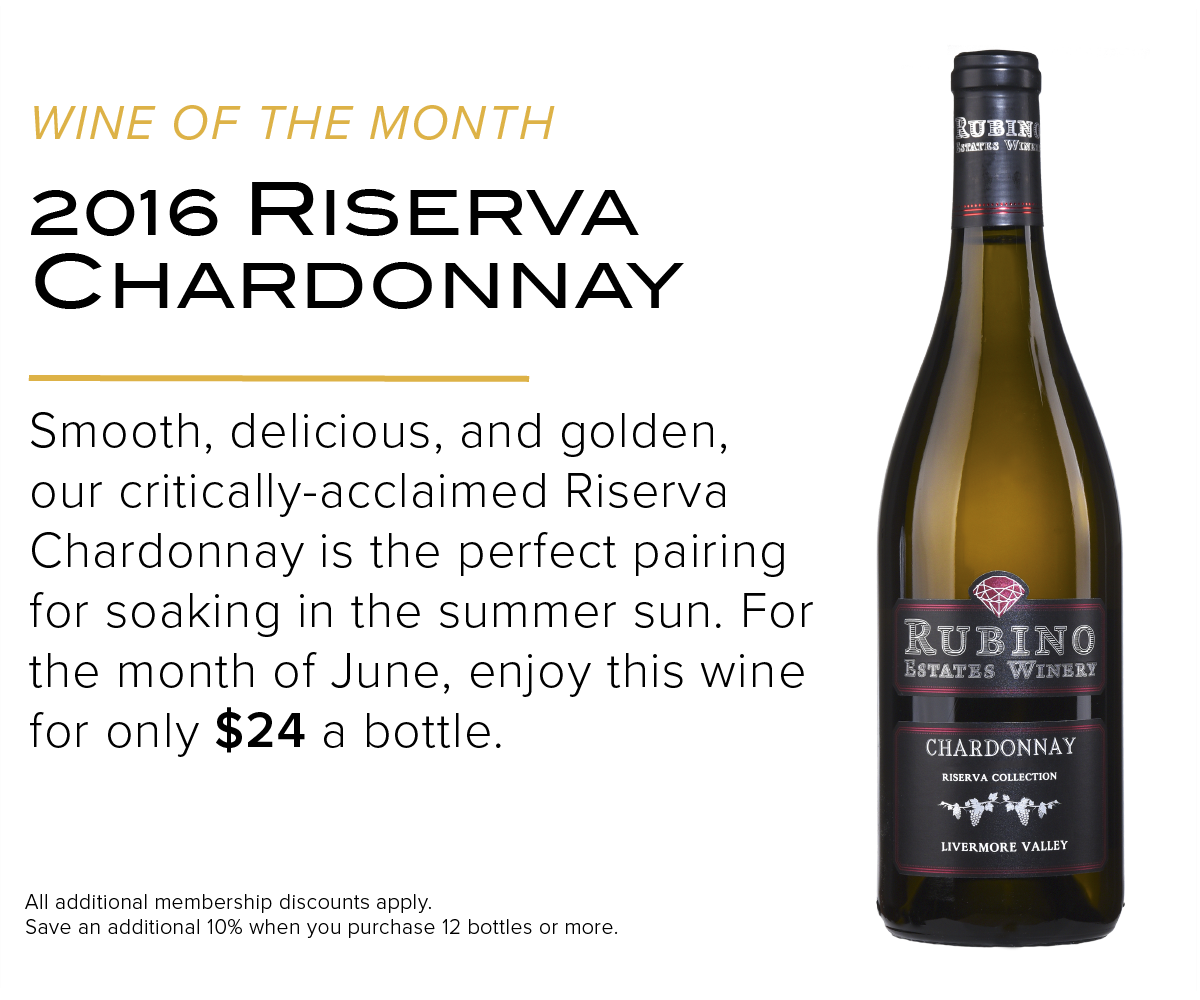 Why You Should Bring Sparkling Wine to a Cookout 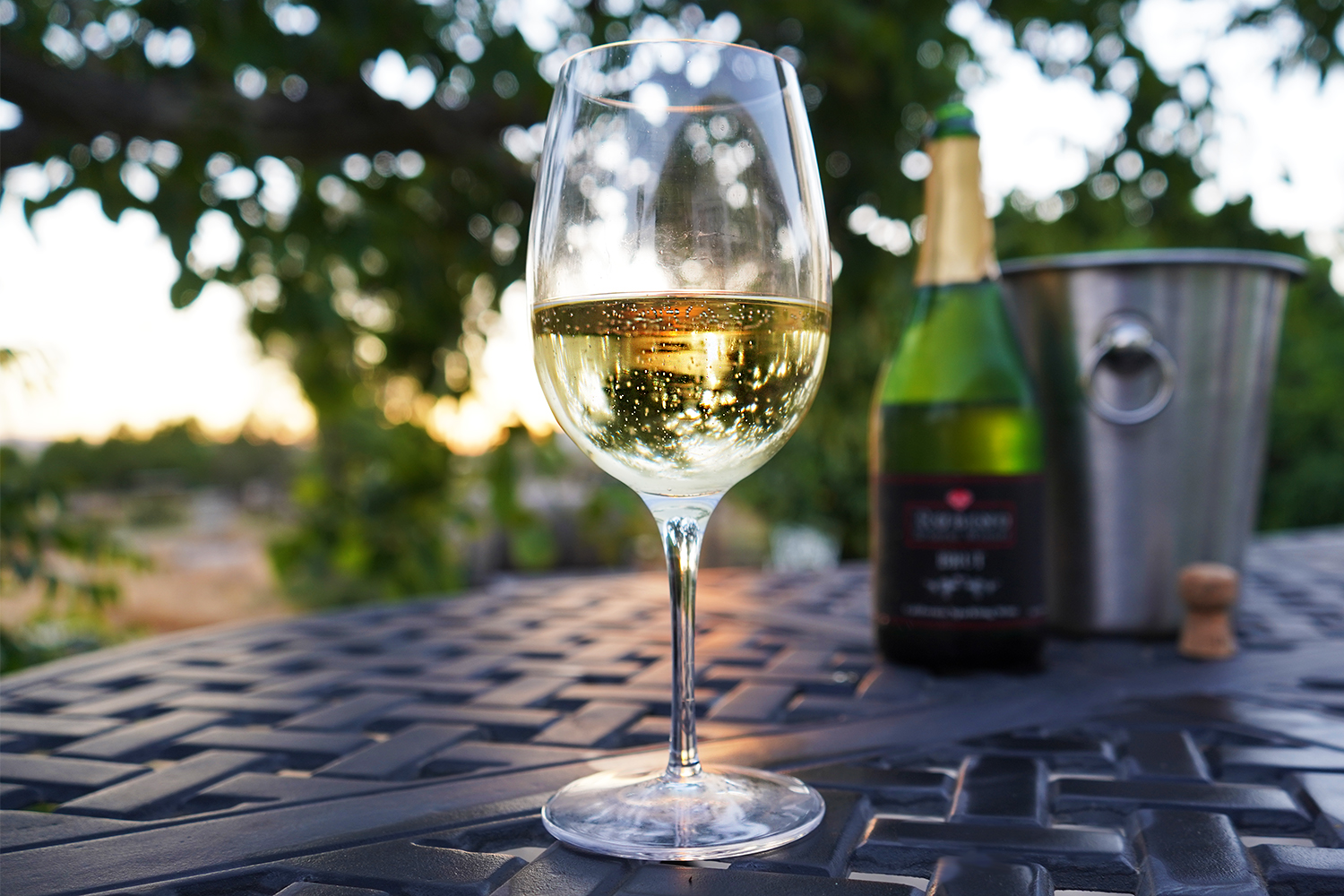 If you’re celebrating Dad or a grad with a barbecue, we’ve got the celebratory beverage for you! Sparkling wine might not be your first thought when you’re planning the menu for a backyard barbecue, but we’re here to advocate for our bubbly friend. Vibrant in warm weather, delicious with salty food, and perfectly versatile, you might be surprised at how delightful a glass of sparkling will taste along your favorite cookout fare. Don’t believe us? Give these a try! 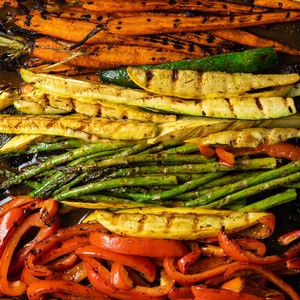 Our parents were right--we’re better off if we eat our veggies. In this case, we’re popping them in a marinade so they offer a burst of flavor as well as color to our smorgasbord. Feel free to play with the flavors, and don’t forget to take a picture of the perfect char marks. 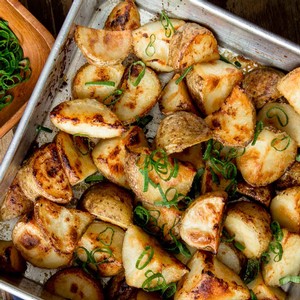 If you’re looking for an elevated substitute for potato salad, look no further than these grilled potatoes. A symphony of umami, sweet, and salty, this recipe promises perfect texture and toothsome taste, perfect for before and after a sip of sparkling wine. 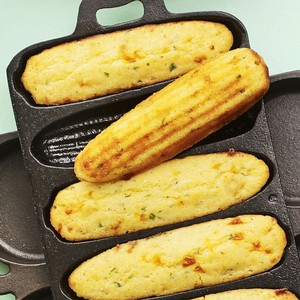 Nothing tastes quite as deliciously authentic as hot cornbread cooked in cast iron. Whether you have a cornbread pan or just a standard cast iron skillet, this classic is a must-have for your cookout. The scallions add a perfect touch of color and the cheese takes this from tasty to drop-dead delicious–and perfect for pairing. 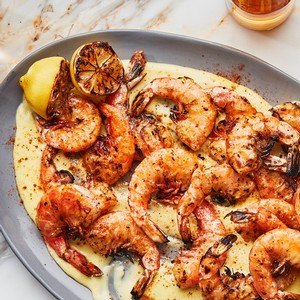 It's hard to beat the smoky, savory profile of grilled shrimp, accented perfectly in this dish by charred lemons and homemade aioli. A little topping of Old Bay seasoning will transport your taste buds to a seaside celebration. Chase it with a sip of bubbly, and you’re in for a good night.

Hopefully, we’ve given all the inspiration you need for an evening of grilling and sweet celebration. If you’re interested in some Sparkling Wine to go along with your dinner, it’s the perfect time to take advantage of our Dads & Grads sparkling sale, available this weekend only! 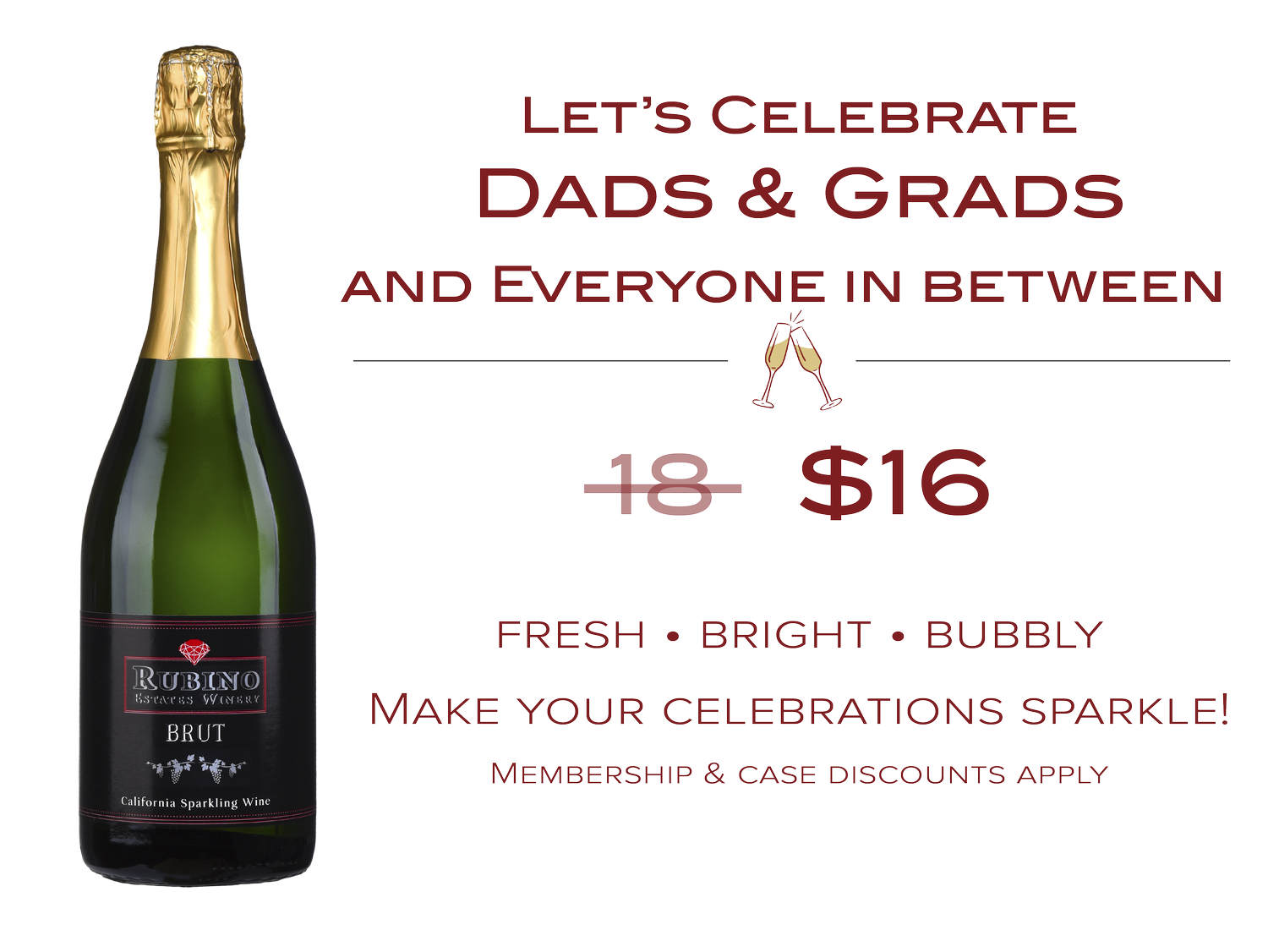 How to Choose the Right Rosé 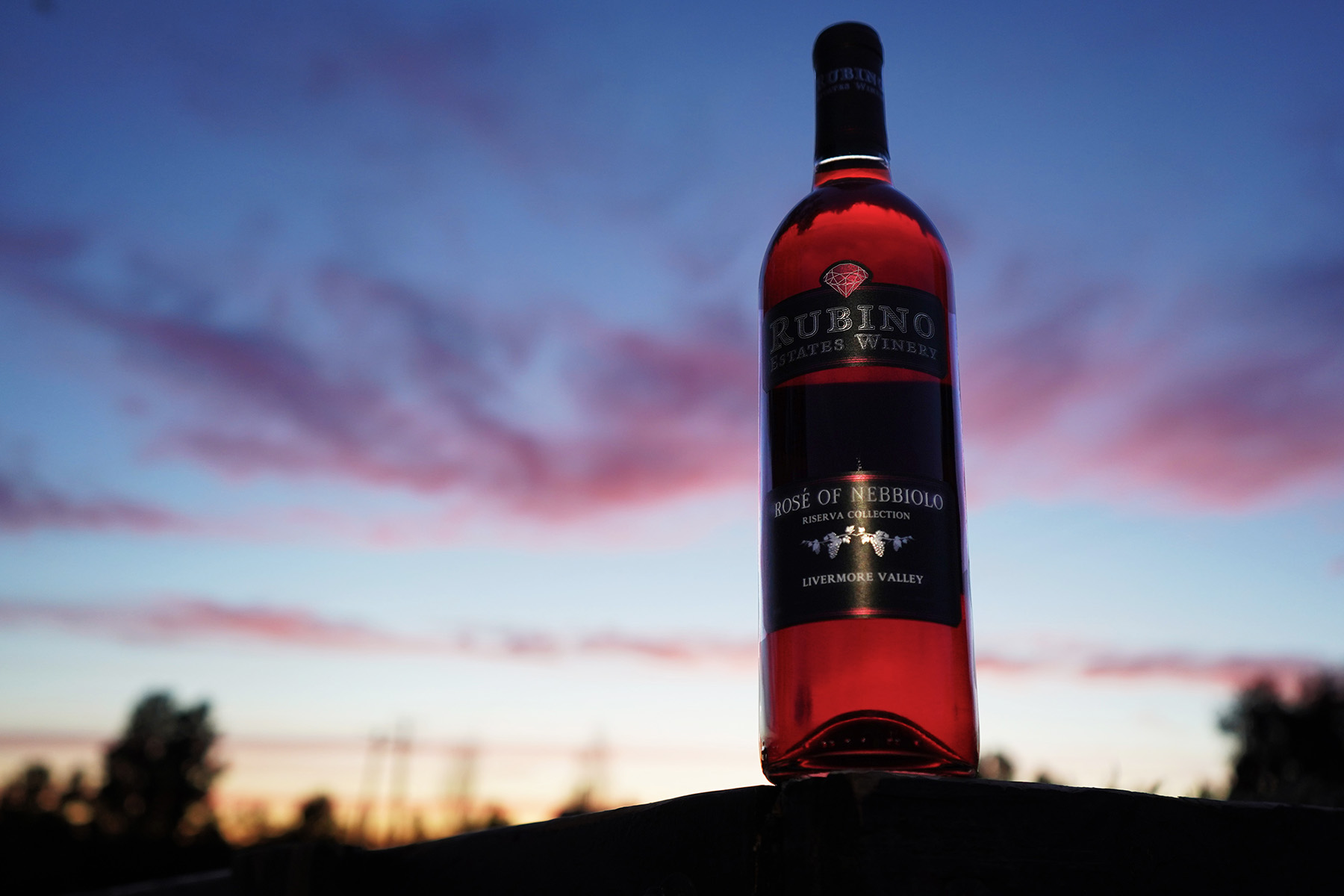 June 12th is Rosé day! This holiday falls on the Second Saturday of June each year, and we're big fans! Rosé wine is on the ascendance, and with good reason. Rosé can be just as sophisticated and refined as red and white wines, with astonishing variety and delicious complexity. Whether you prefer bold or delicate, aromatic or fruit-forward, dry or sweet, there’s a blushing bottle with your name on it. Once you find one you like, another world is opened up to you.

Why is it pink?

There’s actually a couple possible answers! Though it's a popular assumption, rosé isn't made by mixing red and white wines together. It may seem counter-intuitive, but it is possible to make light wines—even white wines—out of purple grapes. The coloration of wine comes from the skins of the grapes, so if the skins are removed before pressing, the product has no red hue. Rosés are crafted from same grapes used in making red wines. In the most popular method, the winemaker leaves the juice in contact with the skins until the desired color is achieved, then strains off the skins. This is the case for both our Rosé of Nebbiolo (100% Nebbiolo) as well as our brand-new 2020 Salute Rosé (100% Sangiovese).

Why is it young?

Darker red wines take time to age and settle into their tannins. Rosé wines, in contrast, are made to capitalize on the delicate aromas and fresh, fruity flavors of their varietals. This is best captured by fermenting the wine at a lower temperature and bottling the wine sooner than other varieties, capturing the precious aromas. Don’t be afraid of a 2020 Rosé! The wine is ready to be enjoyed in all of its intricate flavors and structure.

Which Rosé is right for my palate?

Think about different Rosés the same way you would think about different red wines. Just like you can expect big differences between a Pinot Noir and a Petit Verdot, you can expect big differences between different types of Rosé.
To list a few of the classics: if you like Rosé with high, zesty acidity and fruity notes, go for a Grenache Rosé. For palates that prefer a pale, herbaceous, and savory profile, a Tempranillo Rosé is right for you. Syrah and Cabernet Rosés are full bodied and can often be served and paired like red wine, bearing similarities to their red counterparts without the complexities of oak aging. Zinfandel Rosé, also called White Zinfandel, is mildly sweet and best served very cold. US-grown Nebbiolo Rosé is hard to find, but it’s perfect if you’re looking for a medley of ripe fruit flavors with a light body and pleasantly balanced tartness. If you want a fruity Rosé with a sparkling, coppery color, bursting with fresh flavors without being too sweet, opt for a Sangiovese Rosé.

What flavors should I look for while tasting?

Most Rosé wines have rose petal aromas and pleasant minerality, though every varietal has its own expression. With our Salute Rosé, look for flavors characteristic of Sangiovese Rosé, namely strawberry, raspberry, wild cherry, watermelon, cranberry, and herbs. In our Nebbiolo Rose, on the other hand, search for flavors and aromas of wild strawberry, pomegranate, raspberry, grapefruit, violets, and white pepper.

Wine and Spice & Everything Nice 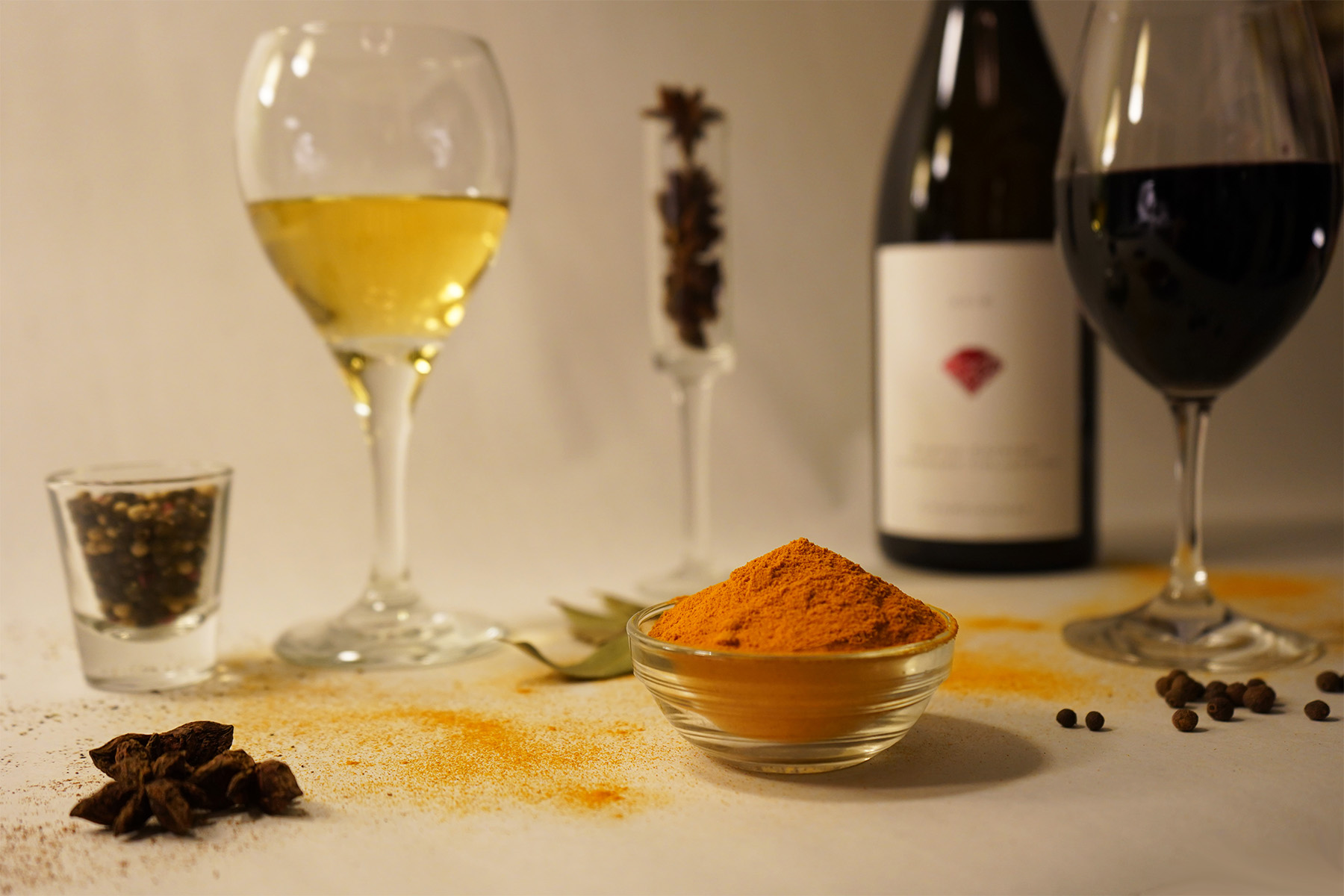 Wine and food pairings are timeless delight. Complementing flavors, aromas, and textures create a symphony on the palate and taste bud euphoria. Today, we’re stepping back from recipes for pairings and putting together ideas for wine pairings for everything in your spice rack! Spices and herbs don’t have to be tricky or overwhelming. This guide will help your favorite flavors shine and give you confidence of what to drink with your signature dishes. 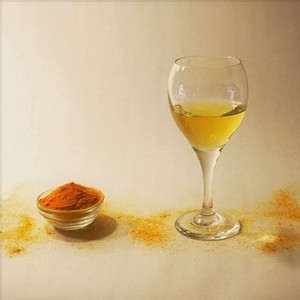 Chives can be thought of as the subdued cousin of onion and garlic. The elegant umami flavor profile of this herb makes chives more than merely a beautiful garnish; they shine in fresh, light foods like omelets, deviled eggs, fish, and salads. These dishes pair deliciously with the creamy mouthfeel and light acidity of our Trebbiano.

Dishes cooked with turmeric feature complex and pungent citrus-pepper notes appearing alongside the signature orange-yellow pigmented hue. Enjoy the flavorful, earthy profile with a glass of buttery-smooth and delightfully aromatic Riserva Chardonnay for a pairing that is good as gold. 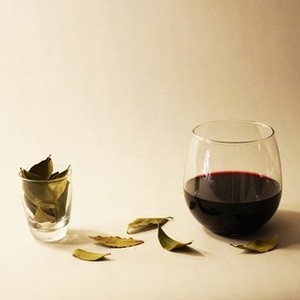 Similar in appearance to peppercorns, Allspice features warm scents of baking spice with a hint of pepper. Suitable for both sweet and savory applications, allspice smells like the holidays all year round. Notes of baking spice and golden crisp apple in our Landmark Pinot Noir make this couple terrifically toothsome.

Rosemary is a friend of wines, pairing well with a number of different reds and blends. Whether dried or fresh, it makes for a tasty and aromatic addition to savory dishes—whether it’s roasted potatoes, focaccia bread, or baked chicken. Enjoy these alongside the smooth body and oak-framed fruit notes of our Primitivo for a delicious combination. 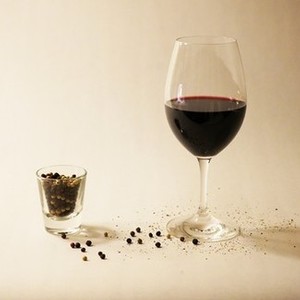 Dried bay leaves are sturdy herbs known to infuse a subtle, almost tea-like, layer of complexity to dishes. Perfect for dishes that require some simmering time, bay leaves lighten up hearty dishes and provide a delicate accompaniment for the elegant aroma and full body of our Landmark Nebbiolo.

What’s better with a glass of Cab than a medium-rare cast-iron seared steak? A pepper-crusted steak! It’s no coincidence; the characteristic tannins of Cabernet Sauvignon build a perfect flavor bridge that is highlighted by dishes with black pepper. Our Riserva Cab has layered, brooding aromas of dark fruit and hints of spice, perfect alongside fresh cracked black pepper. 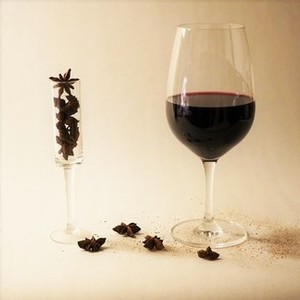 Star anise is beautiful and potent, steeping a sweet peppery licorice flavor into a wide range of savory dishes. Our Landmark Barbera features notes of star anise amidst its complex aroma, making it a stellar companion for anise dishes.

Careful pairings of wine and spices allow different, individual notes of the wine to shine through. It’s often the seasoning of the dish, rather than the dish itself, that makes a pairing palate-perfect, so feel free to experiment and expand this guide to make your food & wine harmonize better than ever!