A Taste of the Past

If we turned back the clock 136 years, what could we expect? In 1885, California had been a state for only 35 years. Its growth was finally beginning to take off, nearing one million people. The little town of Livermore, California was 16 years old and boasted a climate perfect for growing wine grapes. In a red clay knoll on the edge of town, a man named John Crellin planted a 200 acre vineyard. In many ways, 1885 was a different world.

Early in 1885, incumbent President Chester A. Arthur dedicated the Washington Monument, which had taken nearly 40 years to complete due to funding, structural, and political issues. On March 4th of 1885, President Grover Cleveland was sworn in as the 22nd President (he would be elected again as the 24th President in 1892). In June of 1885, the French ship Isère arrived in New York Harbor, carrying the Statue of Liberty.

In 1885, Johannes Brahms’ phenomenal Symphony No. 4 premiered in Meiningen, Germany, with Brahms himself conducting it. In America, the first patent for a roller coaster was granted and Good Housekeeping magazine went on sale for the first time. P. T. Barnum split from his business partner, James Bailey, but continued his wildly popular Circus show.

After the gold rush, California was a place of relative wealth and growing population. In San Francisco, an average laborer could expect to make around $9 per week, while more specialized trades (like bookbinders and blacksmiths) made as much as $20 per week. A loaf of bread would cost about 7¢, while coffee cost an astonishing 30¢ per pound. In 1885, Charles Dow debuted the first edition of the Dow Jones Industrial Average. At the time, the index stood at a level of 62.76, representing the dollar average for stocks of 12 railroads and two leading American industries.

1885 was a monumental year for transportation. At that time, the train was king, but change was foreshadowed. That year the Daimler Reitwagen, regarded as the first modern motorcycle, was patented in Germany by Gottlieb Daimler and Wilhelm Maybach. Soon after, Karl Benz began production of the Benz Patent-Motorwagen, the first automobile, which was patented the following year. Meanwhile, in the US, the Home Insurance Building in Chicago was completed, becoming the first skyscraper in the world, boasting 10 floors and a fireproof metal frame.

Medical milestones in 1885 included the first successful treatment against rabies, which was considered a death sentence prior to this development. The rabies vaccine was developed in part by Louis Pasteur, the French scientist who invented pasteurization. Astronomers were also at work looking up into the stars. In 1885, they recorded the presence of a supernova, naming it S Andromedae, the first supernova to ever be identified outside of our own galaxy.

In late 1885, Dr. Pepper was served for the first time, introduced in Waco, Texas by a pharmacist named Charles Alderton. Further West, California’s wine country was in its infancy. One New York based distributor included a small section in their wine price list for "California Wines" which ranged in price from 50-75 cents per bottle. Dessert wine from California was available in bulk for $1.50—per gallon (about 5 bottles).

It was into this world that John Crellin’s Estate vineyard grew. Today, Rubino Estates continues the legacy of viticulture, growing wine grapes in the Estate’s favorable climate and red clay soil. From our Founder in 1885 to present day, we are proud to continue this legacy. In honor of our Estate’s origin, we have proudly introduced a new wine to our Landmark Collection. Our Landmark 1885 Founder’s Blend is a delicious celebration of history and heritage.

What to Eat with your May Release 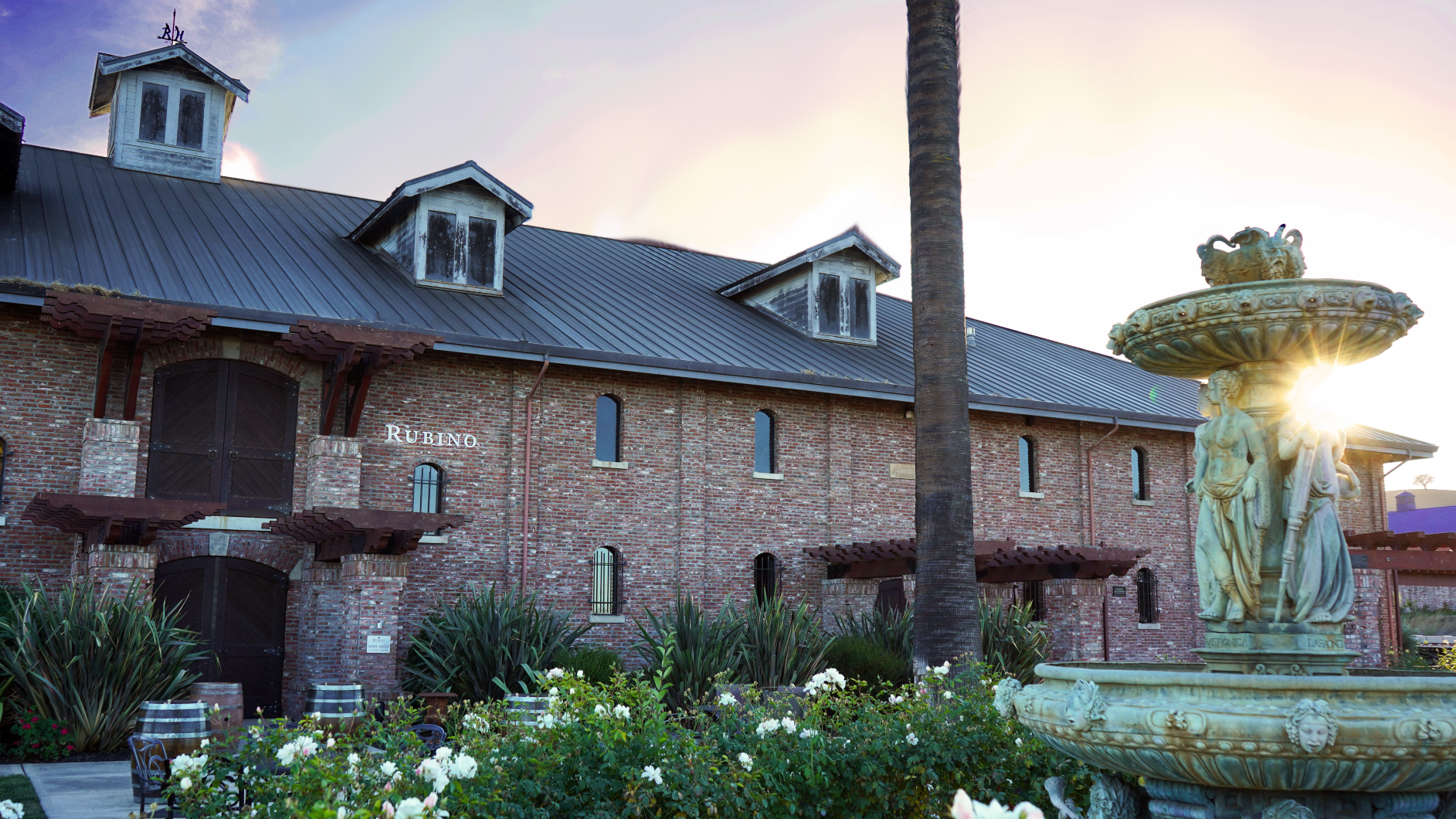 Starting this week, our members have to opportunity to pick up their wines from our May release, and we're so excited to share in the festive spirit. To celebrate, we've put together a few pairing ideas for all of our release wines. We've got starters, sides, and dessert, so it's time to open your favorite bottle and get cooking! 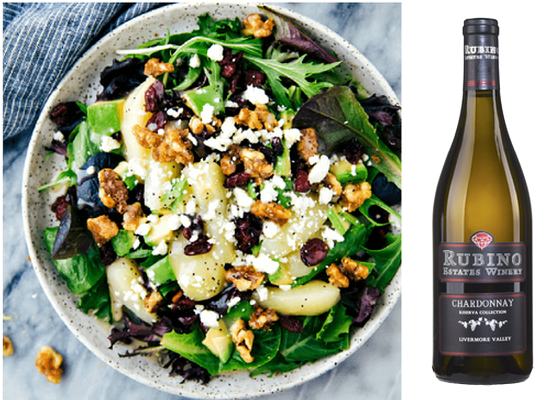 This salad marries together a symphony of flavors and textures; the sweet crunch of the candied walnuts meets creamy diced avocado, tangy feta, and soft pears, topped with a simple lemon poppyseed dressing. Enjoy alongside the gorgeous aroma and rich body of our Riserva Chardonnay for a fresh and delicious pairing. 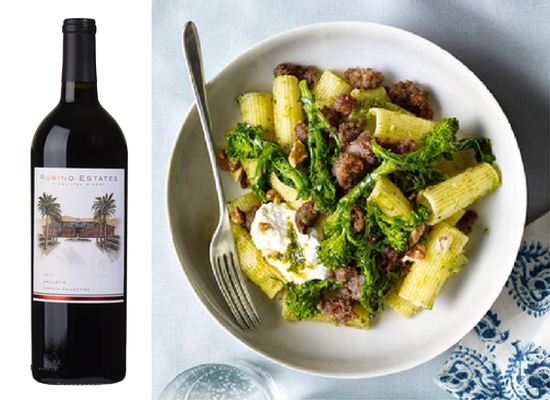 A simple but mouthwatering combination of fresh walnut pesto and Italian sausage joins broccoli rabe and tender rigatoni for a fresh and delicious dish. Served alongside our bright and expressive Famiglia Collection Amuleto, you’ll have a combination to crave. For an easy vegetarian alternative, remove the sausage or substitute it with squash seasoned with sage and caraway. 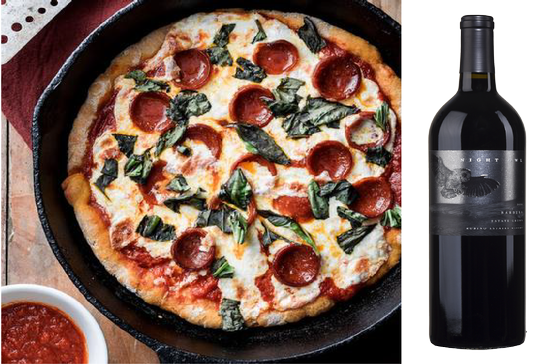 It’s hard to say no to pizza, so we’re leaning into our specialty: Italian style. Our Night Owl Barbera has a full body and food-friendly acidity, making it perfect for all kinds of pairings. It’s right at home next to a homemade pizza! Add any toppings you like; today we’re going for smoked pepperoni and basil. 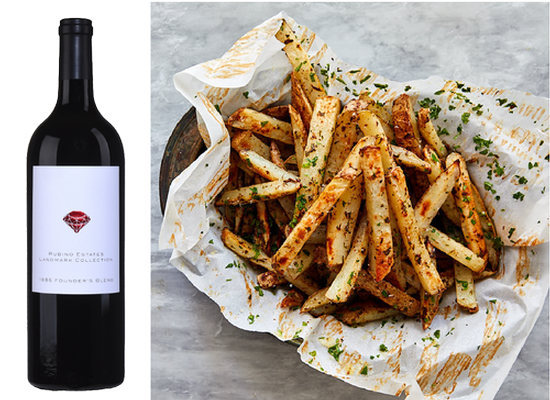 The 1885 Founder’s Blend is a brand-new addition to our Landmark collection, named in honor of the year 1885, when our original estate vineyard was planted by founder John Crellin. This 2018 red blend is smooth and rich with notes of dark fruit, making for a lovely pairing with the earthy and salty notes of homemade truffle fries. 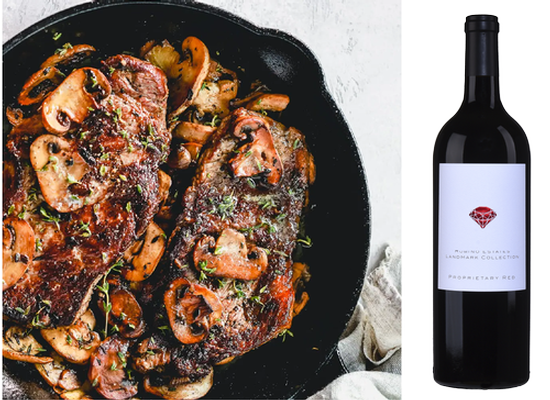 Though the components of our Proprietary Red blend are a close-kept secret, it’s no secret that it pairs fabulously with pan-seared steak. Pull out your favorite cast-iron skillet and try a boneless ribeye or New York strip steaks in this surprisingly simple recipe. Savor your juicy steak and the savory earthiness of the mushrooms with a generous pour of our silky and inviting Proprietary Red. 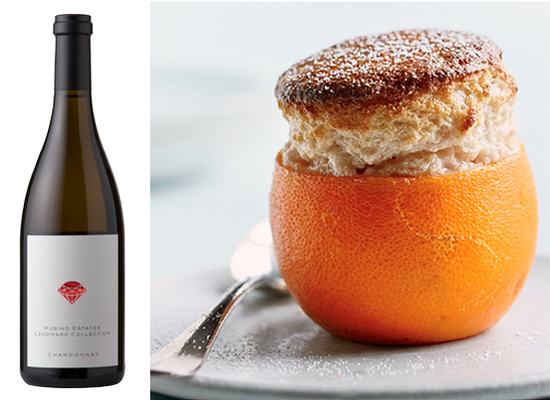 These sweet tangy masterpieces are fluffy, warm, and classy—perfect for pairing with our Landmark Chardonnay. Enjoy sipping on exquisite honeyed aromas and stone fruit flavors infused with butterscotch, then bite into the fresh citrus warmth of these blood-orange souffles.

Happy release! Which pairing is your favorite? Let us know! @rubinoestates
If you're interested in becoming part of the Rubino Estaes Famiglia, click here to learn more about our Wine Club!

Italian Wine Varietals You Should Know 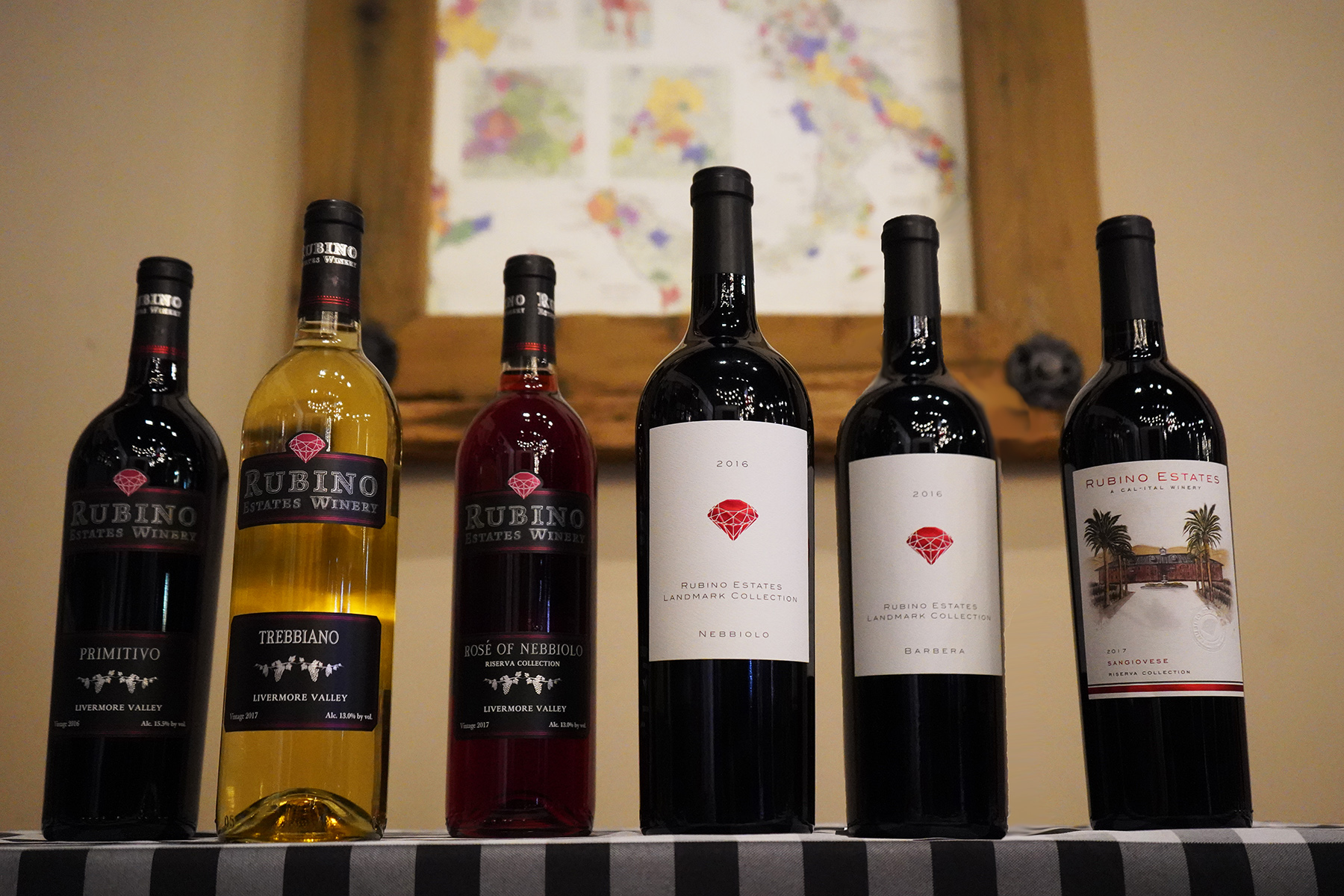 Salute! Here at Rubino Estates, we are proud to bring a taste of Italy to the Livermore Wine Country scene. We are a Cal-Ital winery, infusing old world flair into our wines and borrowing from the rich legacies of both Italian and Californian winemaking. Some of our varietals, such as our Riserva Petite Sirah and Cabernet Sauvignon are familiar classics, while others, such as our Nebbiolo and Trebbiano are rare, delightful, and intriguing. Some of the varietals we feature are rarely grown outside of Italy. 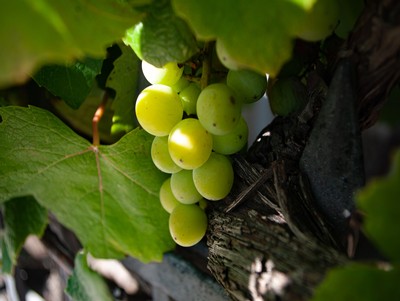 Trebbiano grapes are a pale green, yielding wines that are light in color and on the palate. Refreshing, dry, and crisp, a glass of perfectly chilled Trebbiano is delectable on a summer day. Trebbiano supposedly originated in the eastern Mediterranean regions, making its way to Italy by the Roman times. This easygoing wine is perfect for pairing with all sorts of dishes, especially Mediterranean cuisine. In the US, Trebbiano is a rare find, but wines from the large Trebbiano family account for around one-third of Italy’s white wines.

Sangiovese, often called by the nickname “Sangio” around here, grows prolifically in its home region of Tuscany. Sangiovese is featured in the famous “Super Tuscans” and Chianti Classico, and is the most planted varietal in Italy. In the US, it’s much harder to find. Italy boasts about 155,000 acres of Sangiovese vines—the most planted varietal in the county—while the US grows only 2,000 acres. This varietal’s deep purple grapes produce a gorgeous red color and cherry flavors, with intriguing flavor variation determined by the growing environment. 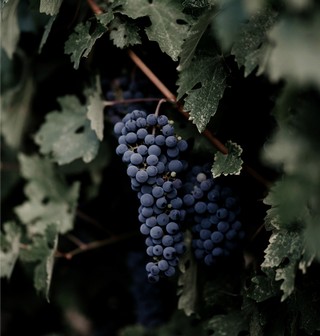 Primitivo is a curious varietal. Genetically, it is identical to Zinfandel, but Italian influence in the winemaking process differs this wine from its close relative. Originally from Croatia, Primitivo was first planted in Italy in the 1700s and now grows heartily in Puglia, the “heel” to Italy’s “boot.” Primitivo earned its name from the Latin word for “early ripening” since Primitivo grapes reach maturity sooner than similar varietals. Primitivo yields wines that are big, jammy, and rustic, perfect for pairing with classic Italian dishes.

Another lesser-known red varietal, Nebbiolo is grown almost exclusively in the Piedmont region of Italy. Historical records as far back as 1268 feature Nebbiolo as a prominent wine grape. The US grows as little as 170 total acres of Nebbiolo nationwide, so we are proud to offer this gem here at our Cal-Ital winery in the form of our Landmark Collection Nebbiolo as well as Rosé of Nebbiolo. The tannic nature of Nebbiolo grapes makes the wine ideal for aging, even holding steady for 20 years or more. The color is a pleasant red and surprisingly bright for being the yield of a purple-black grape. 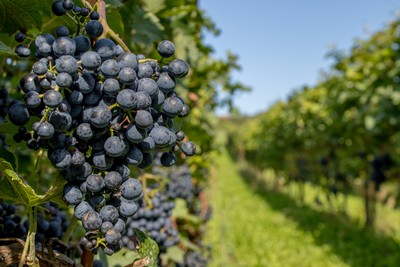 Here in the US, Barbera is one of the best-known Italian varietals, partially due to its vigorous and adaptable nature. Just like us, Barbera loves warm weather, which California has in abundance.This varietal’s prolific vines are known for easy drinking wines that are also worthy of savoring. Barbera grapes are a picturesque purple and yield medium-bodied, dry reds that are simultaneously fruity and savory. If you are looking for a reliable and versatile wine for food pairings, Barbera is the right red for you!

Now that you've got the background info, it's time for the fun part: tasting them! Our tasting room is open seven days a week so we're always here to raise a glass.

Did we miss your favorite varietal? Let us know on social media @rubinoestates! 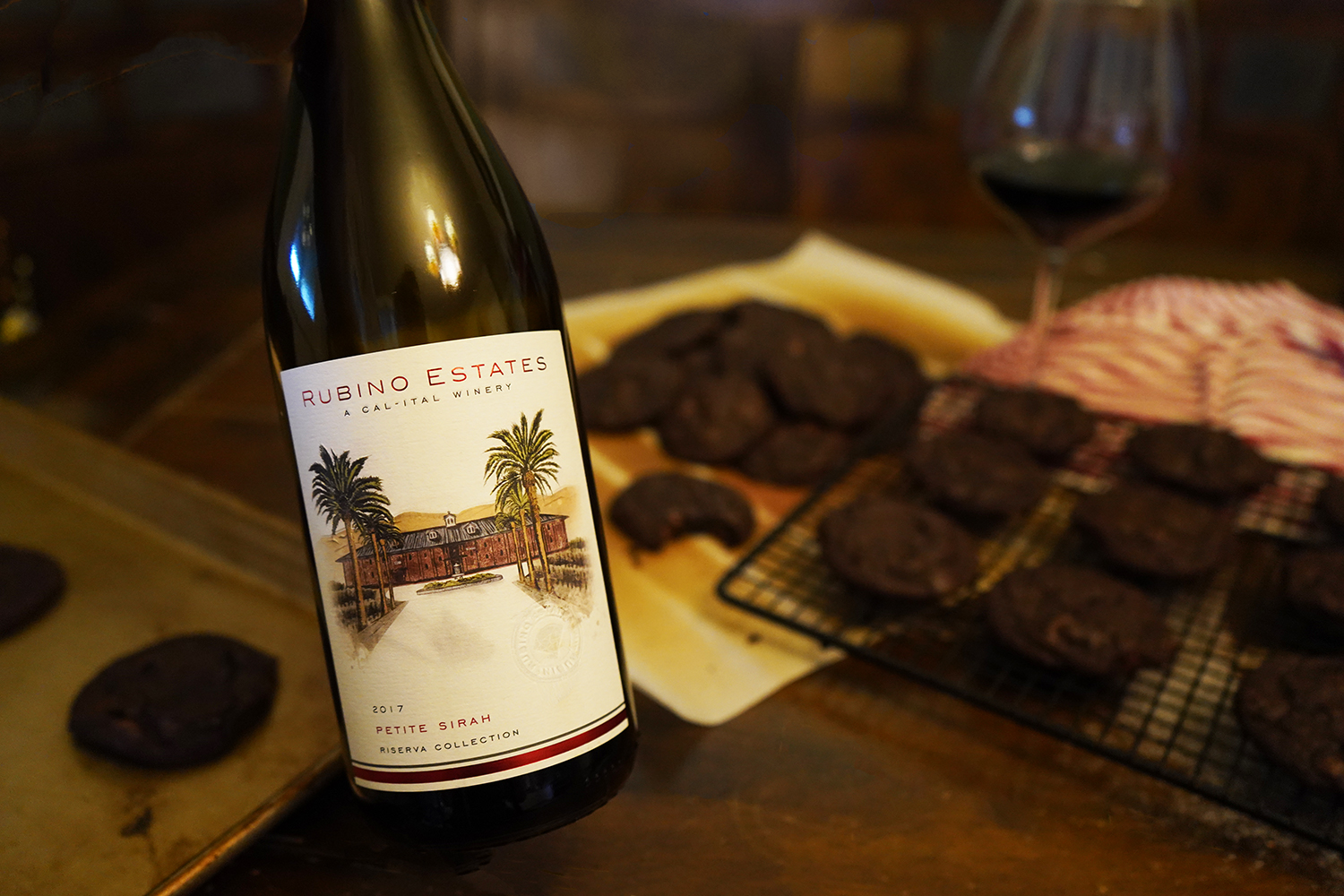 If you’ve got a sweet tooth, then we’ve got the perfect recipe for you. This week, we’re baking decadent double-chocolate cookies to enjoy as a scrumptious food pairing. Our secret ingredient? Wine, of course! We’ve incorporated our award winning 2017 Riserva Petite Sirah into these fudgy masterpieces and the results are heavenly. This dessert pairs the classic couple: chocolate and wine, while adding the excitement of cookies and a flavor reminiscent of red velvet cake and chocolate covered cherries. We must warn that these cookies may be addictive and should be made frequently.

Serve fresh with the rest of your Petite Sirah! We don't want any wine going to waste, of course. These cookies are perfect anytime, not just with wine. Enjoy with your coffee in the morning or tea in the afternoon! They'll keep fresh in an airtight container for up to 3 days.