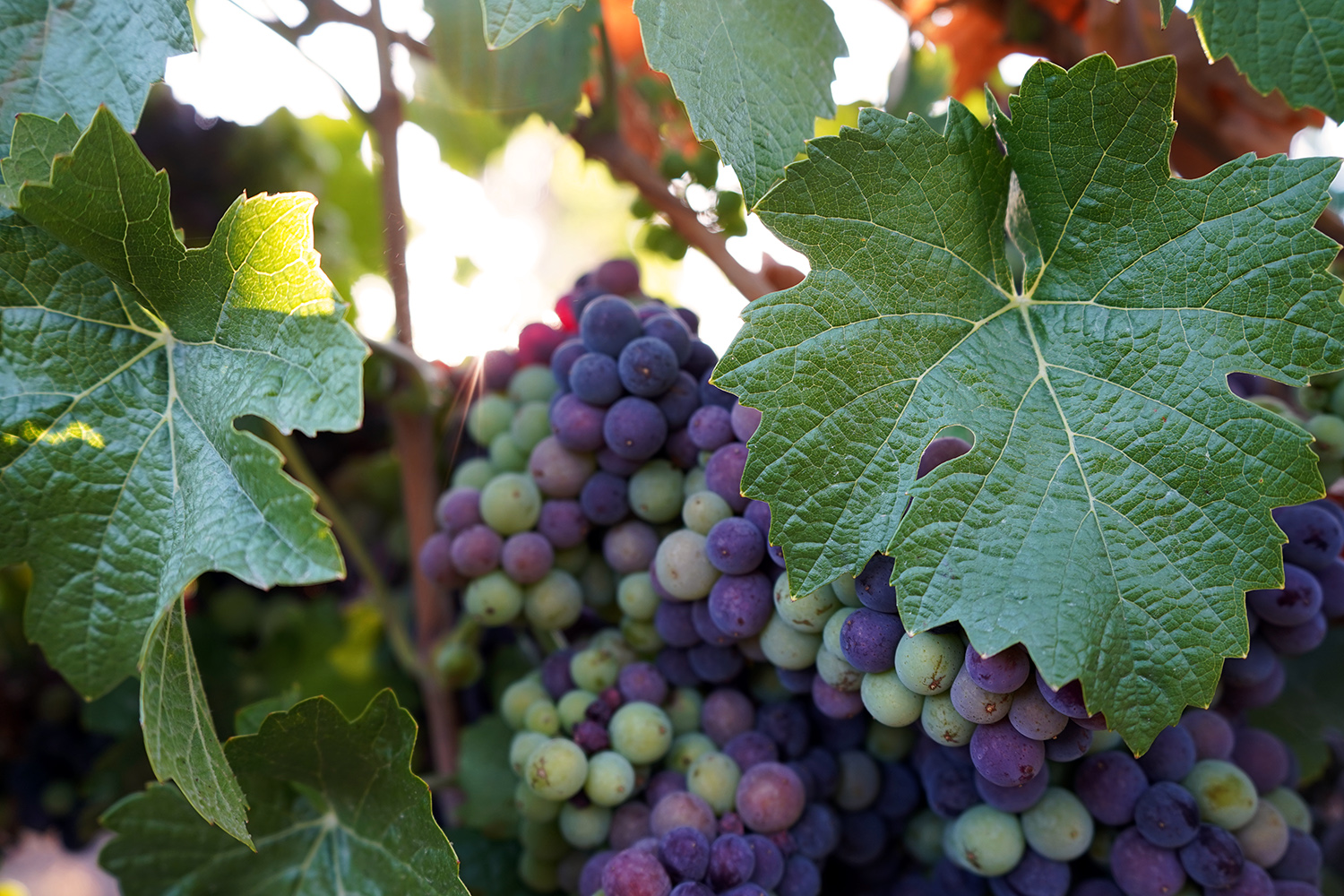 This time of year, the vineyards put on a breathtaking show. Over the course of a few weeks, the green clusters of grape berries shift their color in a process called verasion, marking the end of the growing period and the beginning of ripening. Our winemaking team now begins the countdown to harvest, which usually begins 2 months after the onset of verasion. 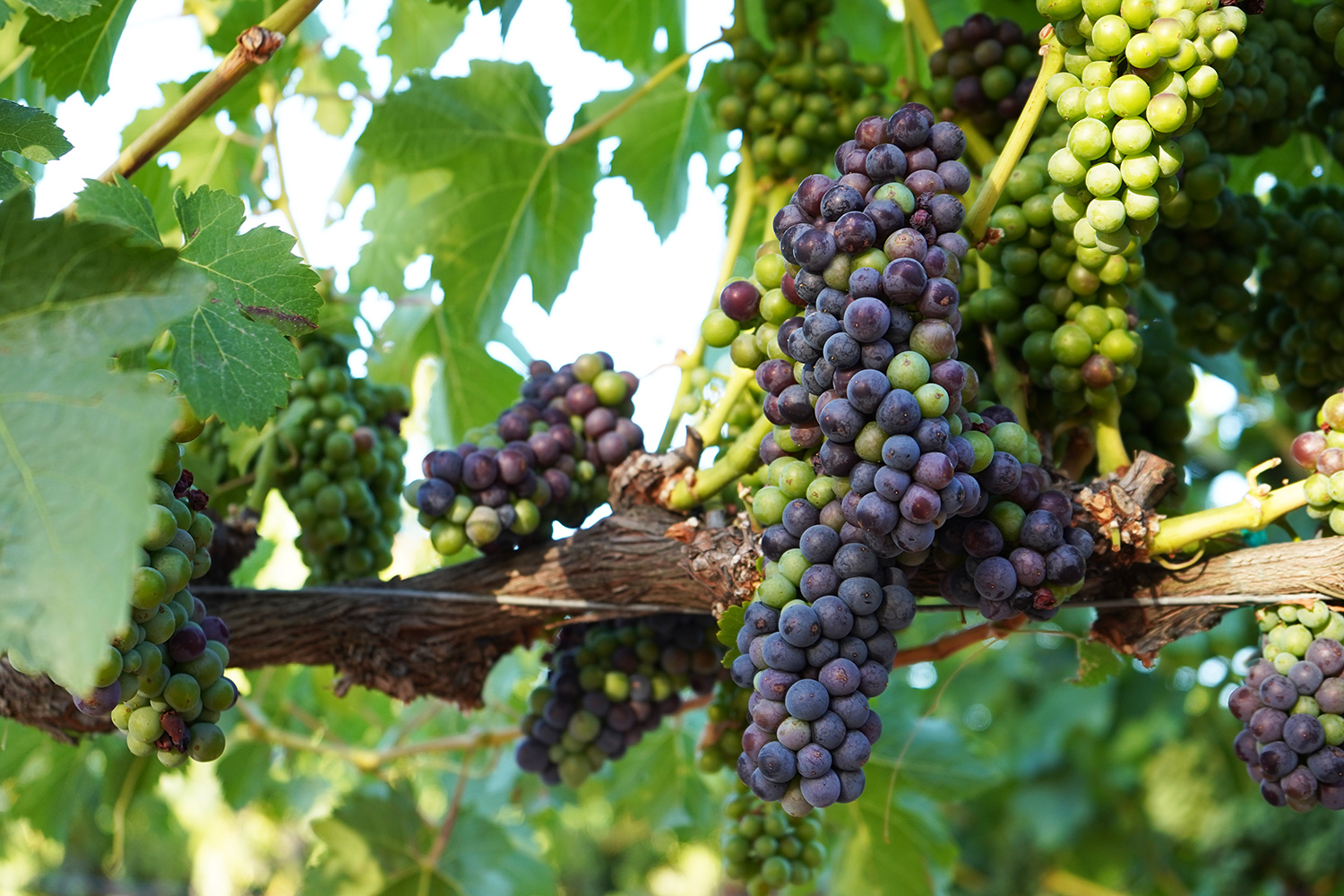 Not long before verasion, the vineyard team meticulously prunes the vines in a process called "leafing" which exposes the fruit to more sunlight, moving the ripening process along. During verasion, our red wine grapes develop their purple color, while our white wine grapes take on a more transparent golden-green. 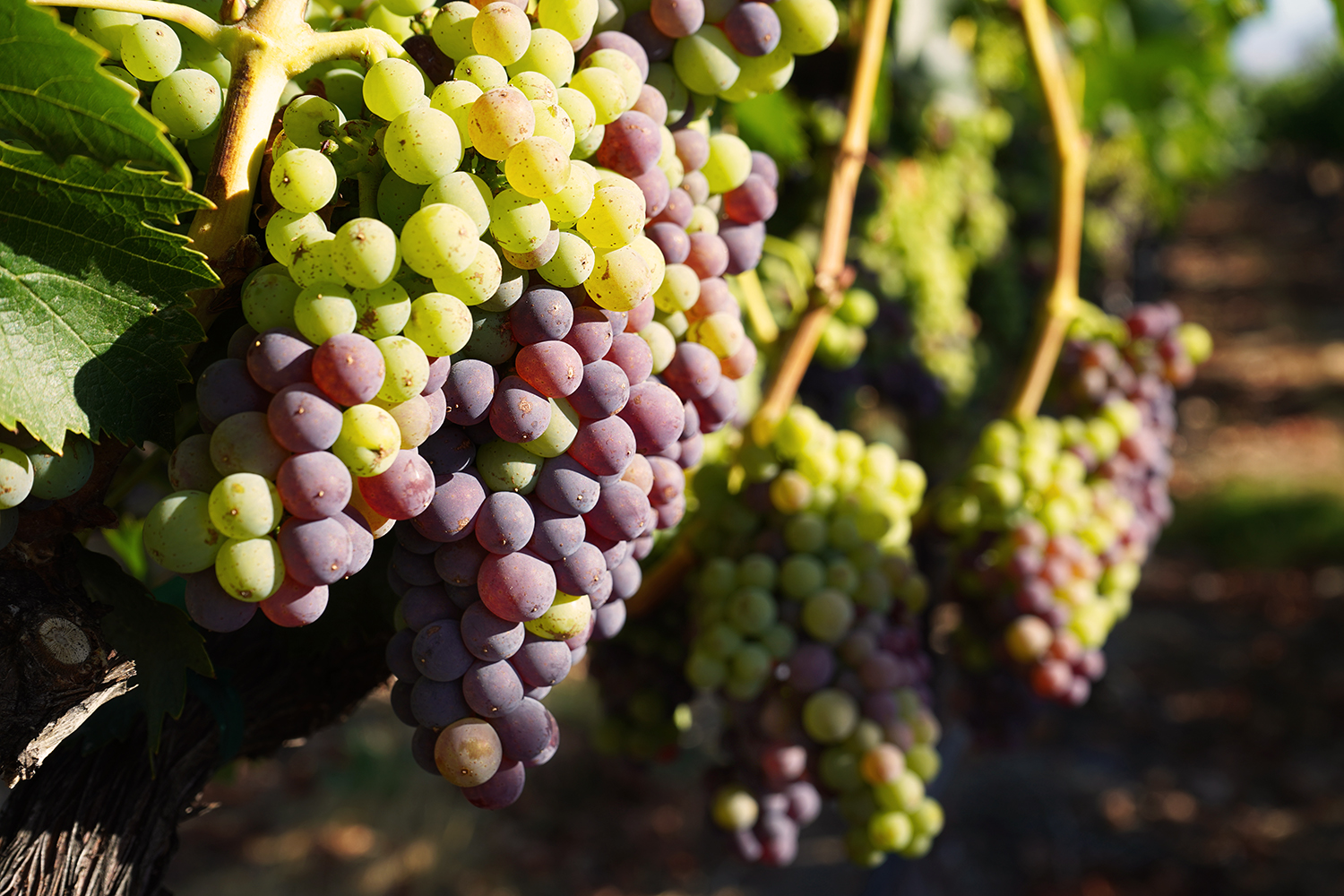 Each varietal takes on a different shade at its own pace. Monitoring the vineyard is especially vital during this part of the year, and it is one beautiful chore. The vines are at their most resplendent each day at sunrise and sunset, shining in the light as a marvelous mosaic of color. 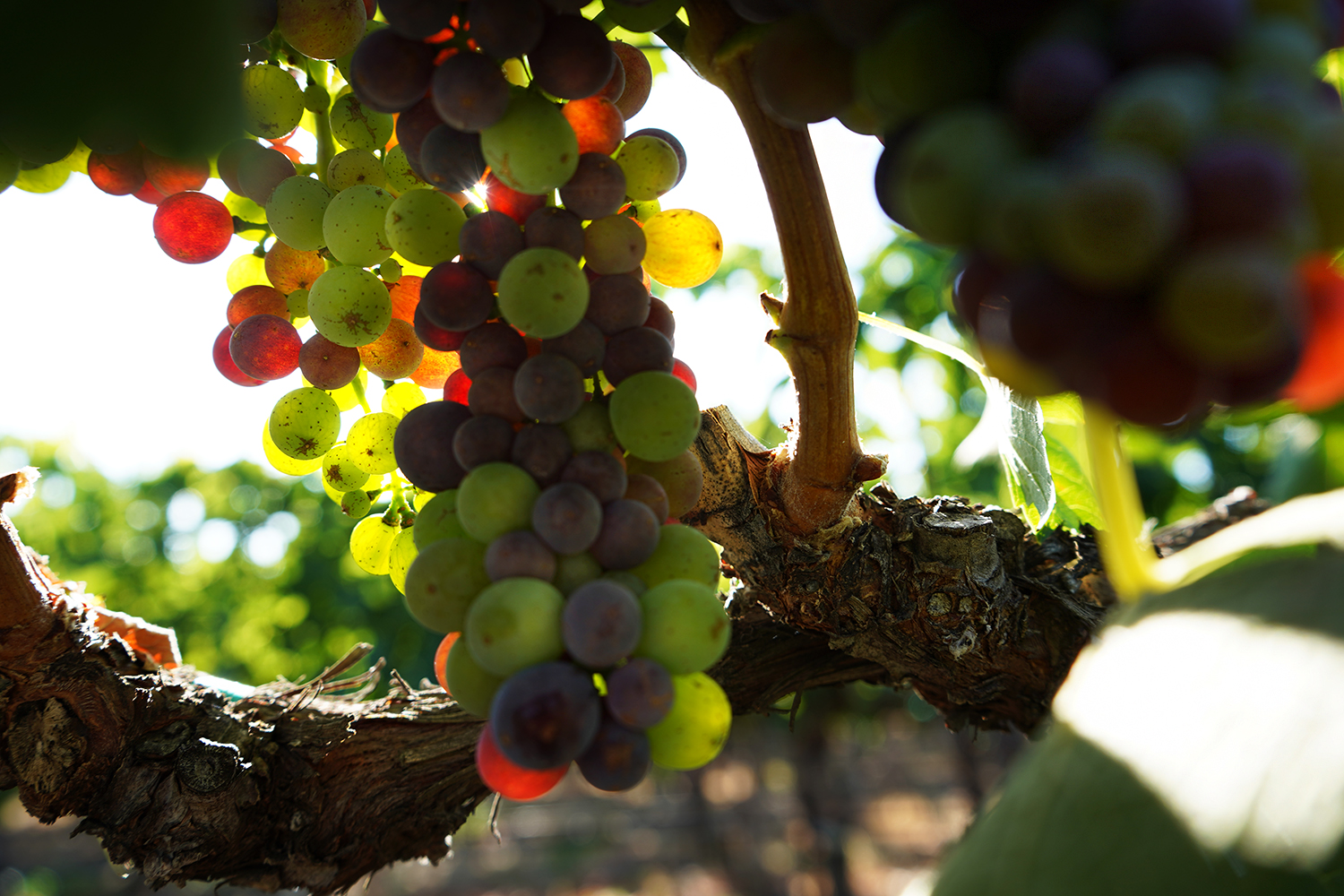 Verasion begins at a different times, dependent on varietal, terrior, and weather. Our first varietal to show color is generally Petite Sirah, developing a gorgeous dark purple hue in mid-July, but our Sangiovese surprised us this year by blushing first! 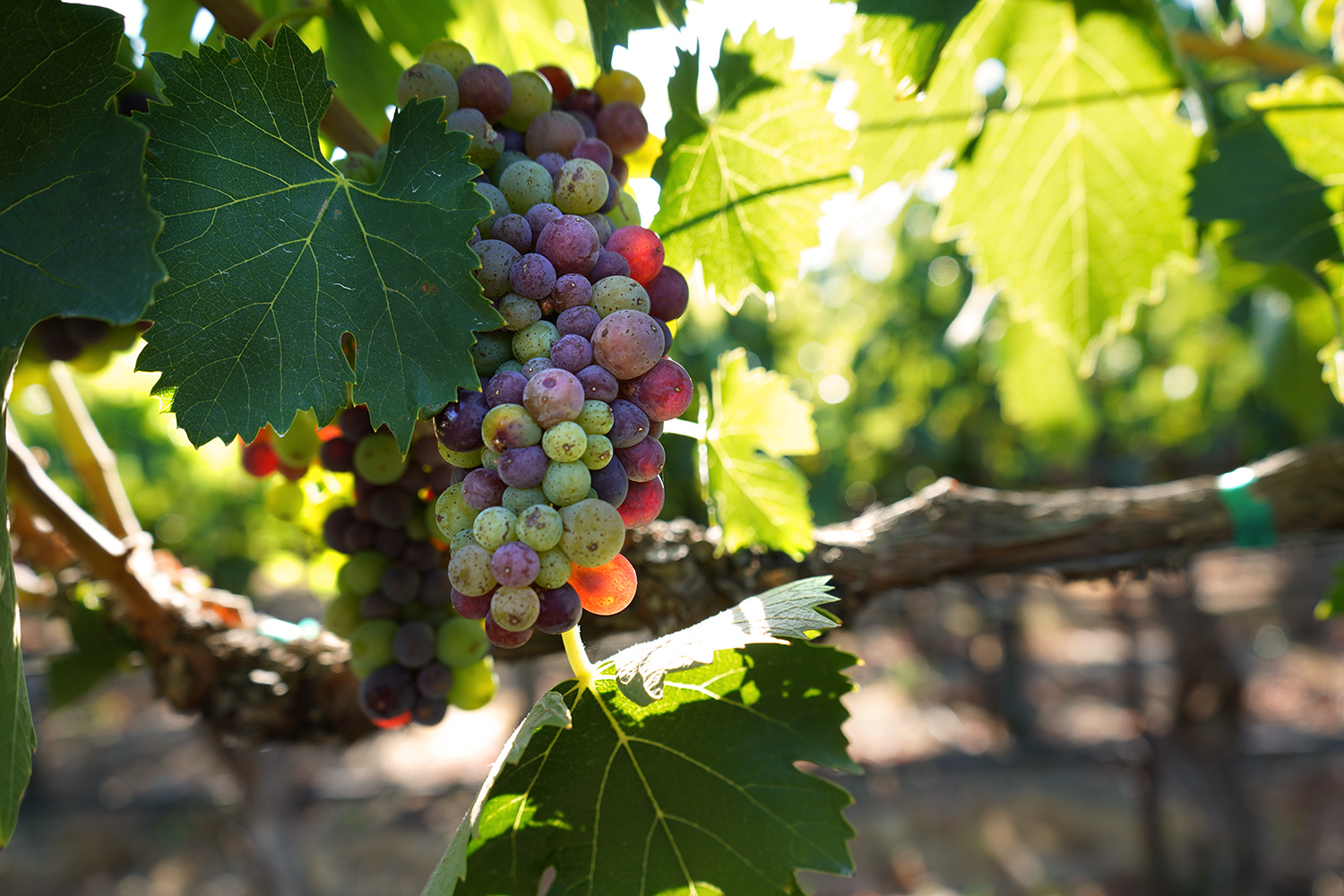 Soon, the cellar will be abuzz with preparation for our Estate's 2021 harvest. We can't wait to see the wines that come from this crop! Which are you most excited for? Let us know @rubinoestates. 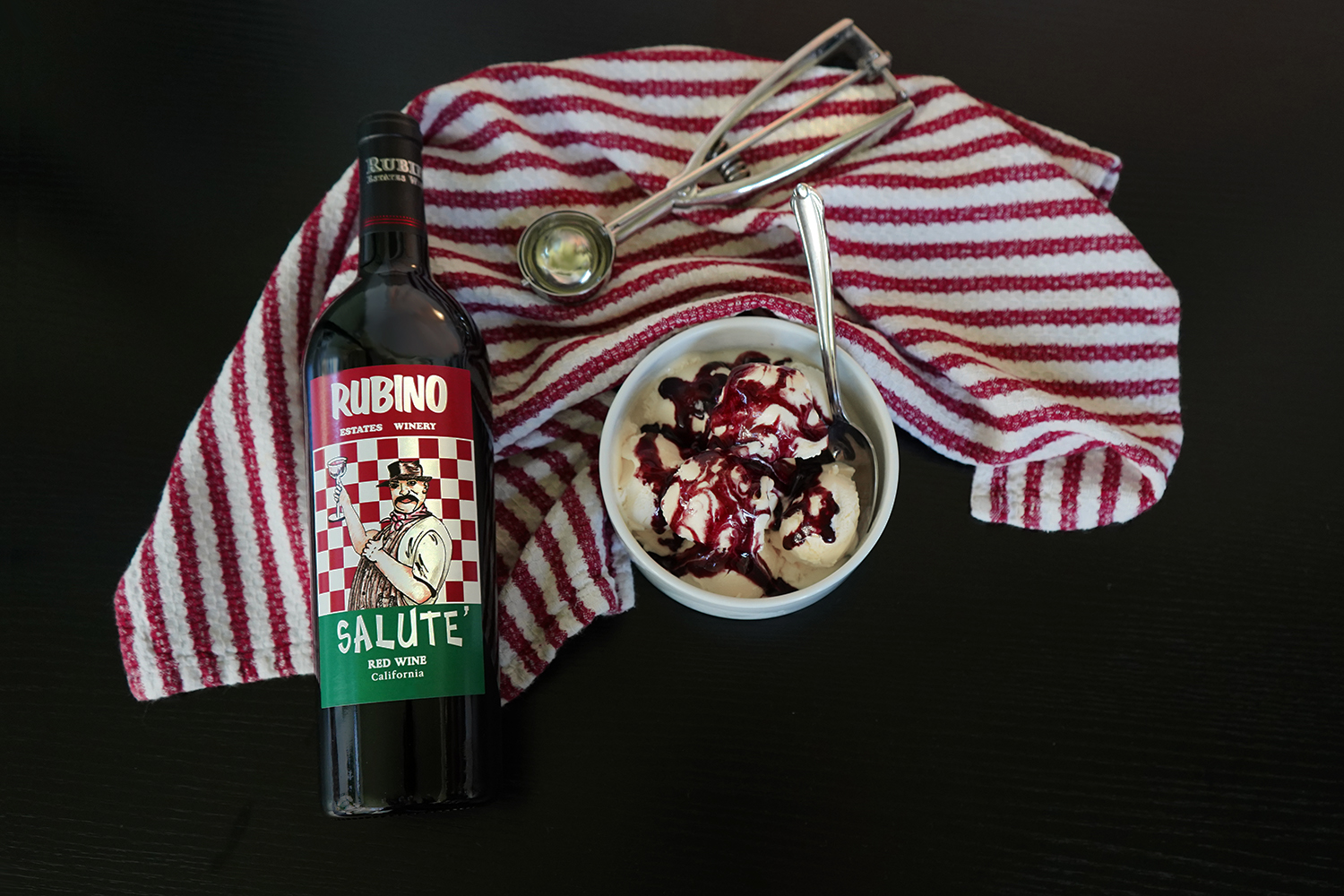 Did you know July is ice cream month? Now is the perfect moment to serve up a few scoops of your favorite ice cream with a new topping: red wine syrup. If you’re looking to elevate your ice cream (and chocolate and caramel don’t cut it) then this is exactly what you need. Enjoy the subtle complexities of the added spice along the fruit notes of our Salute Red for a perfect summertime treat. After all, it’s hard to go wrong with wine and ice cream, and believe it or not, this syrup is very easy to make!

Original Recipe from The Splendid Table

Not in the mood for ice cream? That’s okay too! This syrup tastes great on just about anything. Try it on fresh fruit, brownies, or even on your pancakes (talk about a luxurious brunch)! If you don’t have much of a sweet tooth, try this syrup as a finishing sauce on grilled meats or roasted foods like lamb, pork, or even yams. You can also use it as a dip for your cheese boards and enjoy a symphony of flavors like never before.

Feel free to customize this recipe to your liking! Any of our full-bodied or fruit-forward reds will taste phenomenal, and you can adjust the spices to your liking to make the best syrup for your palate. Try adding additional mulling spices, orange peel, or almond extract for added complexity. Even better, if you increase the sugar in the recipe, try using this syrup in place of simple syrup in your favorite cocktails and watch the flavors illuminate!

Wondering which ice cream to try with this syrup? Try classic vanilla bean, pecan praline, or go full neapolitan. Let us know what you try @rubinoestates! 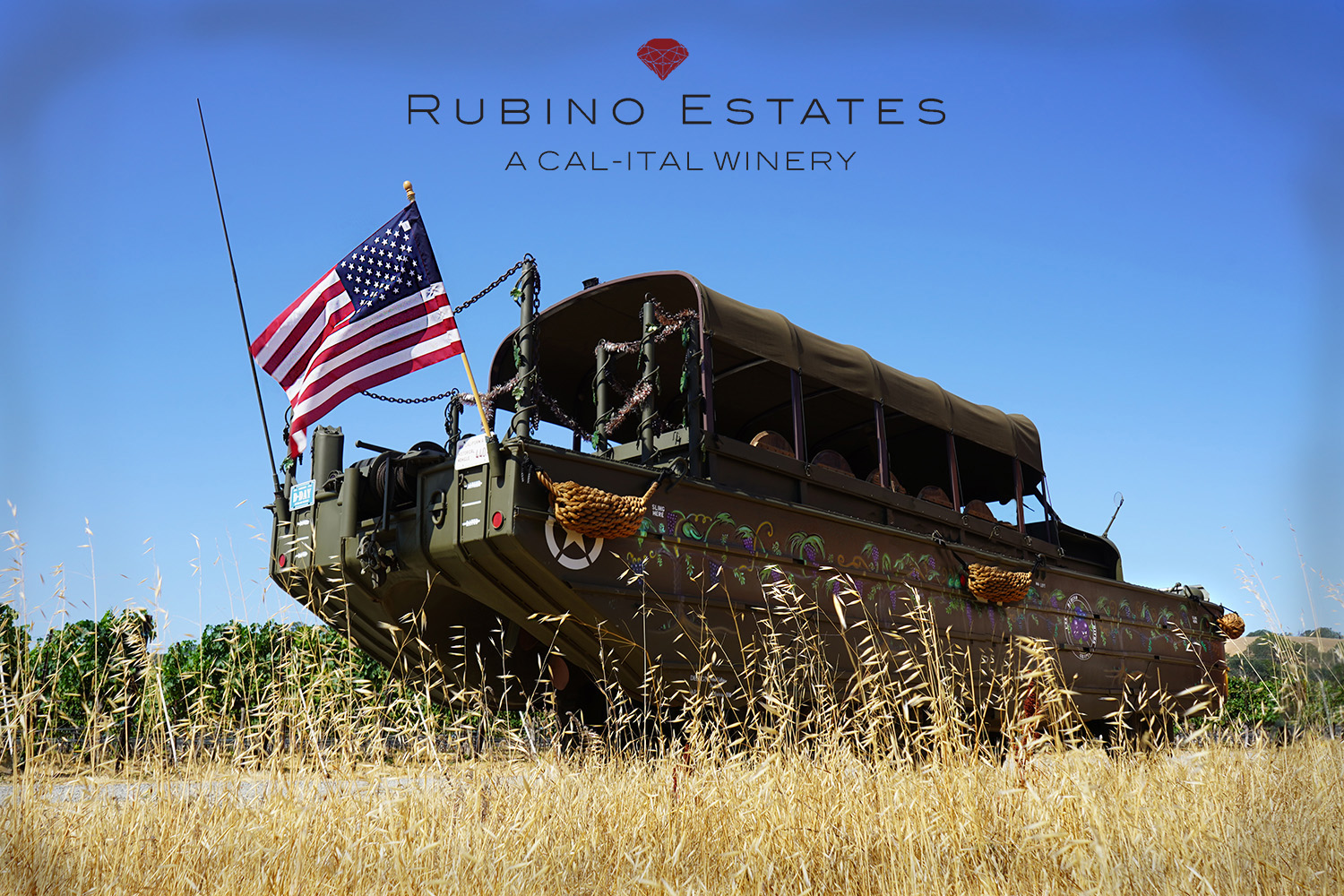 After more than a year’s pause, we are proud to announce the return of our Duck Boat Tour! If your craving for adventure matches your love for good wine, then this experience is perfect for you. Embark upon a journey in our historic Duck boat for an experience including panoramic views, a knowledgeable and charming tour captain, and of course delicious food and wine! Our Duck Boat is an authentic DUKW amphibious vehicle, circa 1950. This vessel now bears the name “USS Rubino” and will take you on a tour unlike any you've ever experienced.

You will begin in the grand ambience of the tasting room, where you will find your Tour Captain ready to whisk you away on a journey around the beauty and secrets of the Estate. It’s time to grab a glass and get going! Soon, you will be taken for a behind-the-scenes peek at our production facility. You’ll have a chance to see equipment from every part of the winemaking process, including thousands of oak barrels. Many of these barrels contain the early stages of what will become your favorite Cal-Ital wines.

Now, the adventure continues as you step aboard the USS Rubino and embark upon a spirited drive through our Estate Vineyard, where you may encounter local wildlife snacking on grapes, young vines developing delicate tendrils, and unbeatable views of the Livermore Valley. As your Captain guides you through the acres of vines, you’ll have a chance to ask questions and learn more about the story and viticulture of the area.

Before returning to the tasting room, you will come to a large table among the vines, shaded by an oak tree. You will be treated to an exclusive flight featuring wines from all of our collections here at Rubino Estates alongside delicious food offerings, including artisan cheeses and other gourmet bites. As you wine and dine amid the vines, your captain will guide you through the flight, giving you expert insight into what makes these wines special. Upon your return to the tasting room, it’s time for dessert! Dark Chocolate alongside our Infinitum Dessert Wine is the cherry on top of this delicious day!

Whether you’re local or visiting for a day, if you want an immersive look into the wine country of the Livermore Valley, don’t miss this opportunity. Our Estate is rich with history and legacy, and it’s our pleasure to invite people into it! Ready for a wine-lover’s adventure? Book now! Give us a call at (925) 484-1699 or email us at events@rubinoestateswinery.com anytime.

5 Wine Cocktails to Try This Summer 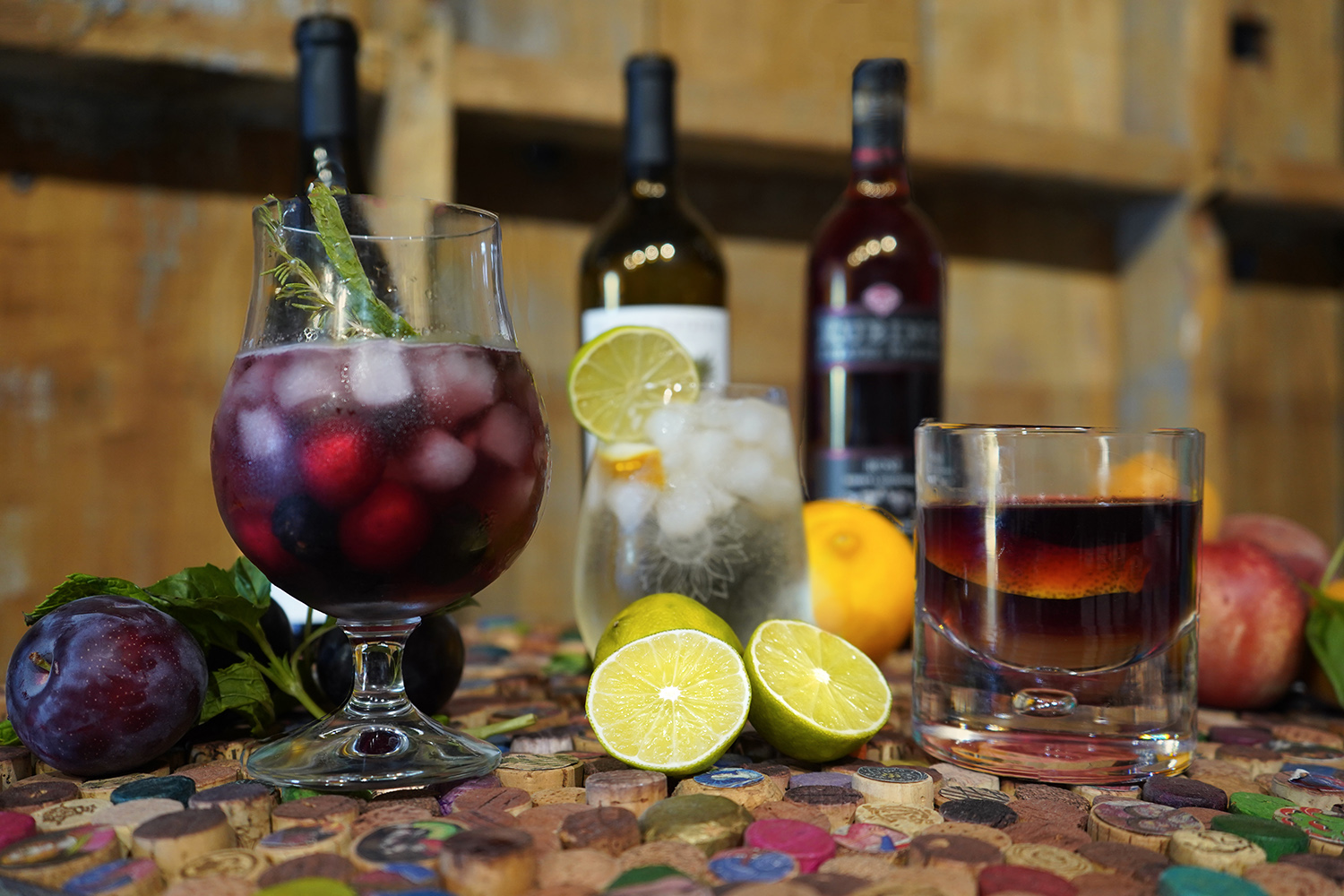 What are you sipping this summer? If you’re looking to branch out from a rotation of chilled Chardonnay and Rosé, we’ve got some refreshing cocktail ideas for you! From a simple spritzer to an elegant New York Sour, the drinks are sure to impress your palate and your friends. Grab some seltzer, ice, and your favorite wines, and get mixing. 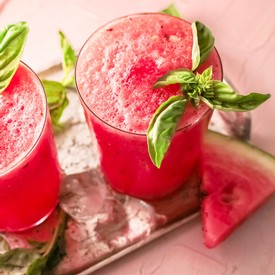 Nothing says summertime quite like a ripe, juicy watermelon. This slush brings out the flavors of the watermelon, accented by the herb garnish. Of course, pouring in a bottle of Trebbiano never hurt! 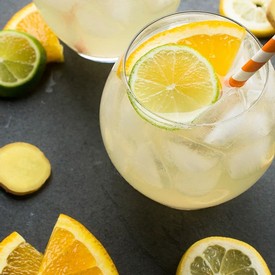 It doesn’t get much more refreshing than this! Easy to prepare for a crowd, this just might become your go-to for backyard celebrations. Try this cocktail with our Riserva Chardonnay for a delicious harmony of flavor, or double the bubbles with a Sparkling Wine! 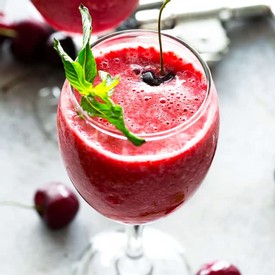 Similar to the Watermelon Slush, this chilled treat maximizes the fruit notes of your favorite rosé. Select a pound of berries to freeze (we like to mix cherries and blackberries from our local farmer’s market) and blend it up with some Rosé! Expert tip for these treats: chill the glasses before adding the slush! 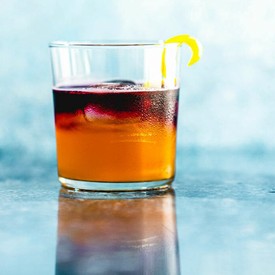 Elevate your cocktail game with this gorgeous cocktail, perfect for those of us who miss red wine in the warm weather. With an approachable recipe and a beautiful presentation, this is the intersection of elegant and fresh! Enjoy with a fruit forward wine such as our member-exclusive Amuleto. 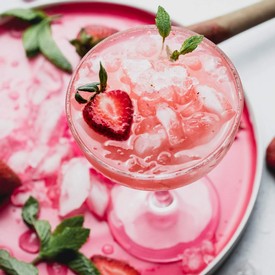 Lastly, we couldn't neglect strawberry season. Summer fruits are unmatched, and nothing beats a ruby red strawberry bursting with juicy flavor, brightening up a cocktail like this! Enjoy this spritzer with a splash of our Fumé Blanc and jazz up your summer sipping. You’ll be glad you did!

Which cocktail is calling your name? Let us know @rubinoestates!

A Taste of Winemaking History in the USA 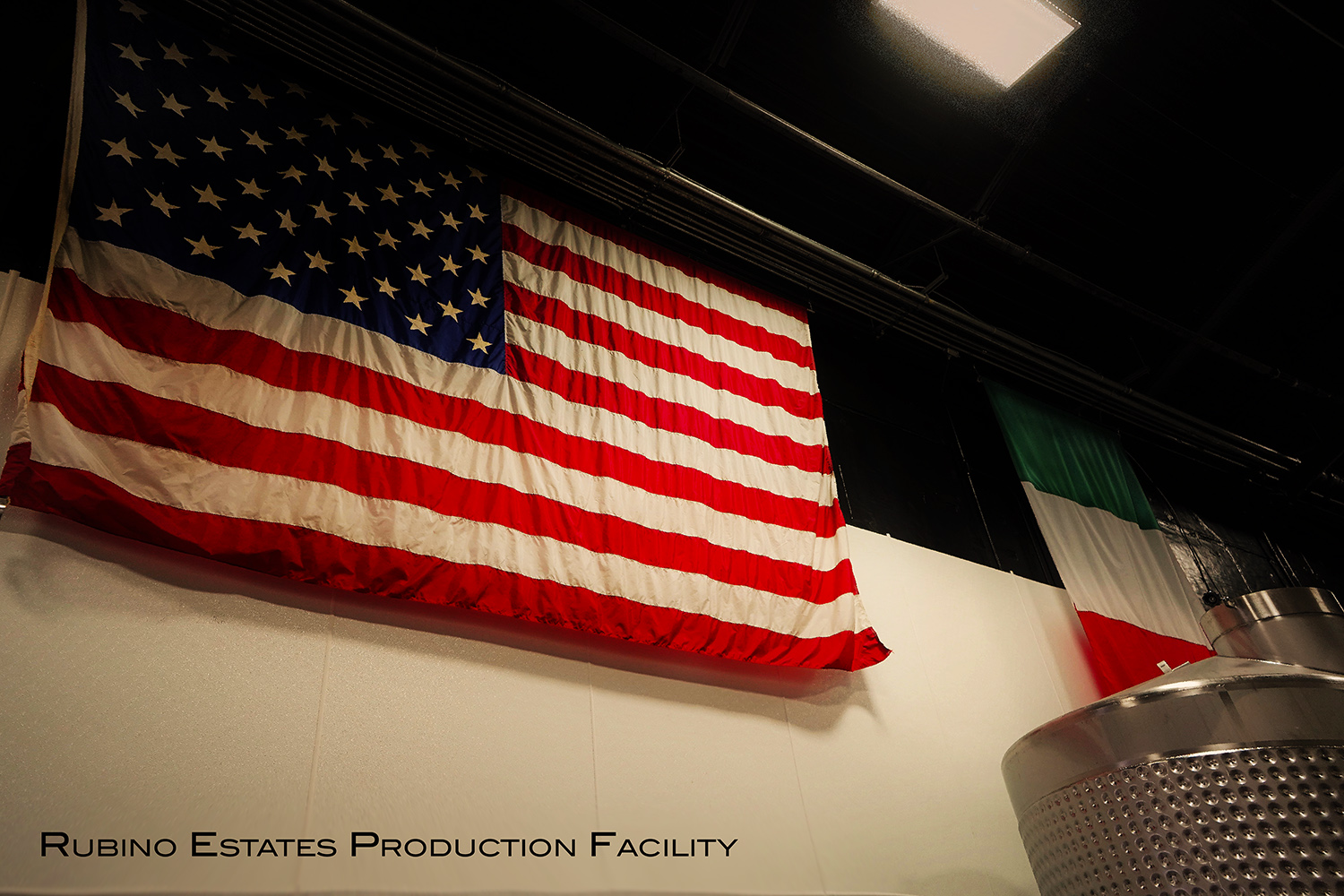 This weekend is our time to celebrate the United States! Nowadays, every U.S. state (yes, even Alaska) produces wine, but that wasn’t always the case. Just like this country, winemaking in the US has come a long way from humble and difficult beginnings, with plenty of mistakes along the way. Today, we’re taking time to look back and celebrate progress!

The first wines in America were made in the 16th century with native grapes, in an area near modern-day Jacksonville, Florida. In the charters held by European settlers, winemaking was listed as one of the goals of their venture. When they found the native grapes unpleasant to their palate, Europeans eventually began bringing cuttings from their favorite wine grapes across the Atlantic. In the same era, Spanish settlers in what is now California and New Mexico began planting vineyards as they built Missions, a heritage which continues today with California’s robust wine country.

After the United States was established, Thomas Jefferson attempted to plant a vineyard with French grapes, but the vines could not hold up in the North American climate. In 1805, two small oak casks of wine were brought to President Jefferson from a new winery in Kentucky, but the winery’s vines soon suffered a similar fate. Winemakers in the early United States were met with continual opposition from the North American climate and pests, which European grapes could not sustain. It was not until traditional French grapes were crossed with grapes native to the Americas that the U.S. saw its first widespread commercial plantings.

Cincinnati, Ohio was the home of the first majorly successful wineries in the United States, beginning in the early 1800s. Helped by the labor of German immigrants and the soil of the Ohio River Valley, the wineries boasted at least 1500 acres of vines. These plantings produced until Black rot swept through, decimating the plantings. To escape the rot, several winemakers moved their operations to the now-famous Finger Lakes region of New York. The oldest continually operating winery in the U.S. is Brotherhood Winery in New York, established in 1839, only 45 years before the first plantings on our Estate.

Prohibition began nationwide in 1920 when the 18th amendment was ratified, and put a severe dent in the U.S.’s place in the wine market. Limited production of wine was permitted for sacramental use, allowing the monks and nuns of Mission wineries to preserve some of the grape varieties people loved. Of course, bootleggers also helped sustain the industry, transporting and selling alcohol illegally. At the time, our Estate winery was permitted to operate to produce sacramental wines, but Ernest Ferrario, the owner at the time, was widely rumored to also be a bootlegger.

Prohibition was repealed in 1933, shortly after the global GDP had dropped at least 15% in the beginning of what is now called the Great Depression. Demand for heavy, sweet wines with high alcohol content increased, and the American wine industry struggled to dust itself off and keep up with demand. As time passed and research into winemaking was performed by premier academic institutions, most notably California’s UC Davis, US winemaking grew in both quality and efficiency.

The 1970s saw a flood of investments into American (especially Californian) wineries as winemakers focused on making wine the best it could be. No longer would they aim to produce a copy of European wine, but rather unique, brilliant representations of what the US could offer. The Judgement of Paris—a blind tasting in 1976 which resulted in two Californian wines beating out traditional European wines—solidified the foothold of American wine in the global market. Robust, thrilling, and exuberant, the wines of the USA could compete with wines from all around the world. They still do. Today, upwards of 1.1 million acres of vines grow in the US, with a production of at least 800 million gallons of wine each year. We're honored to join in this rich legacy and tradition.