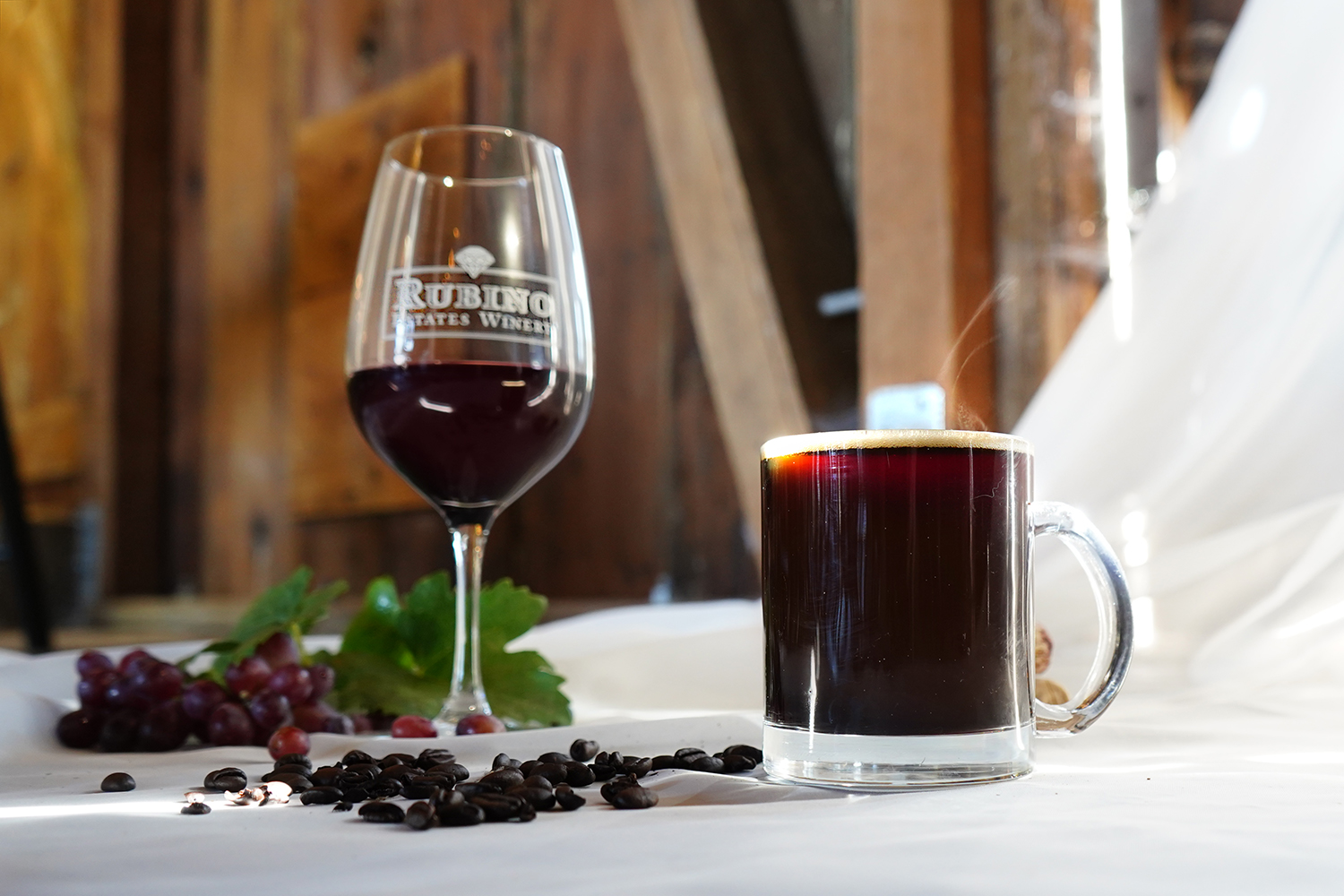 Now that it is officially fall, we feel that it’s time to cozy up with a warm, spiced coffee in the mornings and a lovely glass of wine in the evenings. To celebrate the return of the cozy season, we’ve developed a guide to what wine you may enjoy based on your coffee beverage of choice for fall.

If you like Cold Brew with Cream -
Try our Landmark Chardonnay! Enjoy the smoothest sips enhanced by a delicious creaminess on the palate. These chilled drinks are especially enjoyable in the balmy California autumn.

If you like a Locally Roasted Pour-Over -
You might like our critically acclaimed Club-Exclusive Tuscano. Crafted from a blend of Barbera and Cabernet with careful touches of Petit Verdot, Sangiovese, and Merlot, the experience of the Tuscano brings out the best of its components the way pour-over brewing allows both the subtle and bold flavors to shine.

If you like a simple Iced Latte -
Then you should enjoy sipping on our Salute Rosé. Crafted from 100% Sangiovese, this Rosé is worth enjoying all year long. Aromatic, light, and refreshing, it will leave you wanting more.

If you like a Flat White -
Then you should try our Primitivo. If you’ve broken free of your habit of ordering the same latte over and over, then try a more obscure and delicious red like our Primitivo. It’s a gorgeous ruby-red, absolutely delectable, and anything but disappointing!

If you like a Sweet Blended Frappé -
You’ll love our Moscato! It’s fun, sweet, and carefree. Created from Muscat of Alexandria, this sparkling dessert wine is perfect for anyone with a bit of a sweet tooth and an appreciation for a chilled, expressive sip!

If you like Hot Black Coffee -
Then you should order up a glass (or a bottle) of our Riserva Cabernet Sauvignon! We agree that there is no harm in appreciating the classics, especially when they are created with care and full of every flavor you love.

If you like a Pumpkin Spice Latte -
Enjoy our Riserva Petite Sirah! This big, bold Petite Sirah is a luscious symphony of flavor, with rich baking spices right on the nose. If you like the flavors of autumn, then this is perfect for you.

If you like a straight Espresso Shot -
Try our Infinitum Dessert Wine. This Port-style wine is rich in flavor and curiously delicious in small quantities. You’ll find you’re always wishing for a few more drops.

If it's not coffee time, then it must be time for wine, right? Let us know your favorite things to sip @rubinoestates. 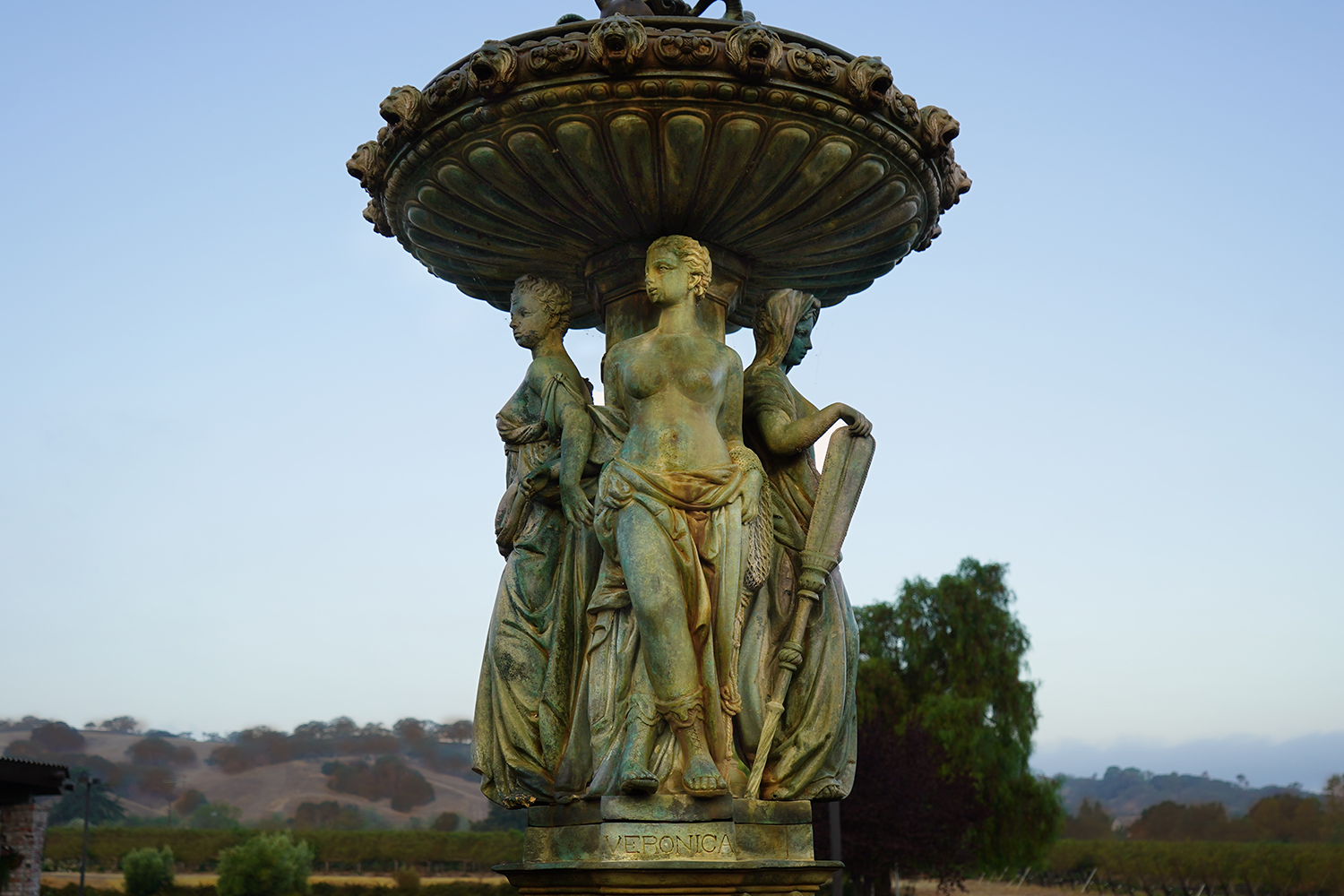 Veronica, the maiden of Autumn, looks out over the Estate.

Now that our harvest is in full swing, there is never a dull moment in the cellar as our Winemaker and his team work their magic on the fruit to craft wines from the best of the best. As the labor of harvest time progresses, we can’t help but dream of the beauty and wonder of fall. Throughout history, the autumnal season of harvest has been the focus of many myths, folktales, superstition, and poetry. To harvest is to join in the rich and storied history of millennia of farmers and their toil. To celebrate the richness of fall is to join in the festivities of many generations before us. Today, we’ll endeavor to do both by diving into the charming stories, traditions, and superstitions of days gone by.

Autumn is one of the most stunning times of year, as the world turns from lush green tones into shocking yellow, burnt orange, and rich scarlet. Prior to the modern era, this season would define the seasons to come. Scarce harvests threatened their livelihoods. From the crucial nature of Autumn and harvest sprang forth superstitions of every kind.

Native American Cherokee lore stated that the pattern of the fall season was set forth early in the life of the world. An injured sparrow sought shelter during harsh weather, visiting oak, maple, and other leafed trees, but all rejected him. Only the pine, with his bushy needles, accepted and protected the sparrow. Because of their callous treatment of the sparrow, the other trees were cursed to lose their leaves every year when the harsh weather was on its way.

In other traditions, It was thought that the earlier the colors of fall peaked on the trees, the milder the winter would be. If a red rose bloomed in the fall, it was taken as an omen that a marriage was in store for someone in the nearest home. Anyone spry enough to catch a leaf as it fell from a tree before reaching the ground would be safe from colds that winter.

Autumnal superstitions still impact our lives today. The old English calendar had “quarter days,” events marking their times and seasons in March, June, September, and December. Michaelmas, the quarter day of autumn, fell on September 29th and marked the deadline for harvesting. This is why the school year traditionally began in September.

Old harvesting practices also gave the “Harvest Moon” its title. It is the name given to the full moon closest to the Autumnal Equinox, which appears unusually close to sunset and would give field laborers valuable light to continue working by. These workers were traditionally supplied with a large ration of hard cider each day. Often the farmer’s wives would also lay a “teatime” spread for the workers, as going home to eat would waste valuable daylight. At that time, a single field worker could be expected to harvest one acre per workday. In the 1870s, the horse-drawn reaper binder represented a huge forward step in harvest technology, because 2 men could harvest an acre in a single hour when using this device. How far we have come! 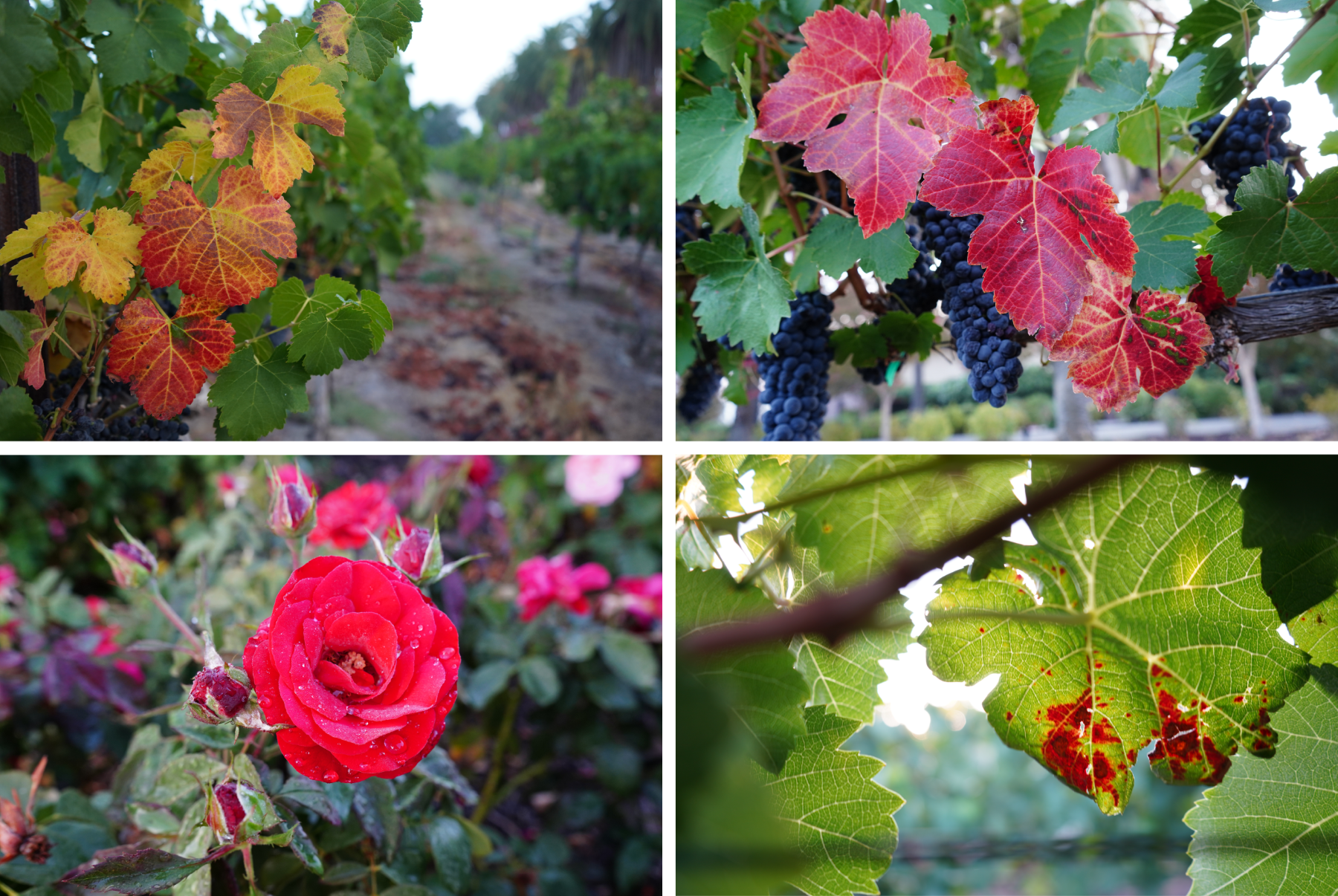 Autumn begins to touch the Estate with a crimson kiss.

Do the Math, Drink the Wine 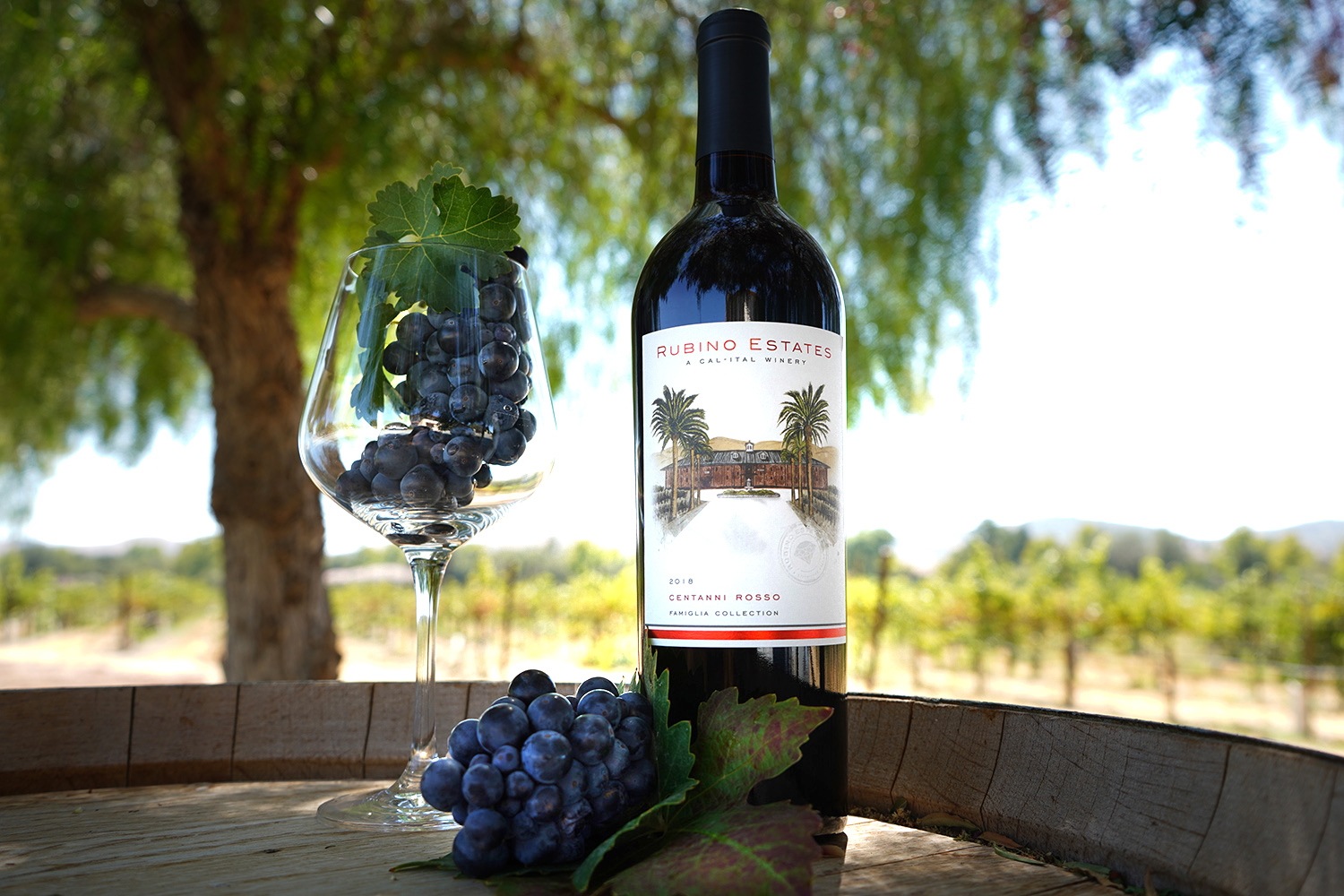 Harvest 2021 is officially underway here at Rubino Estates! We have begun to bring in the fruit for our white wines and Rosé, and we anticipate a busy and productive phase as our Winemaker and cellar team begin the process of turning grapes into the wine you know and love. This process involves taking tons (yes, literal tons) of grapes and transforming them into irresistible vino. For anyone wondering how much wine comes from a ton of grapes? We're glad you asked! Below, we've included some of our favorite "wine math" to answer all your burning questions.

How many barrels and bottles is a ton?
One ton (2,000 pounds) of grapes produces about 756 bottles of wine, enough to fill 2.5 barrels. Each barrel of wine holds about 25 cases worth—this means that our standard barrels contain roughly 300 bottles in volume. Each of these barrels requires around 1200-1500 clusters to fill.

How many grape clusters do you need to make a bottle or a glass of wine?
It takes about 5 full clusters to make a bottle of wine, and each standard-sized bottle contains about 5 glasses of wine. Therefore, a cluster of grapes yields approximately one glass of wine. If each glass contains a cluster, then it should not be a difficult leap to discern the quantity of grapes in each glass.

So, how many grapes are in a glass of wine?
Alas, there is no straightforward answer. It depends on everything from varietal to winemaking technique. This answer isn't as satisfying as we'd like, however, so we'll go with a safe average of about 80 grapes in a glass of wine and 400 grapes in each bottle.

For any wine enthusiasts (or math enthusiasts) who want to know more about these numbers, it's important to note that all of the numbers listed above can actually have an immense amount of variability depending on a wide range of factors. The weight of grape clusters is influenced by variables such as sugar content or weather (grapes may be plump from rain). Furthermore, the number of individual grapes that go into a bottle or glass of wine will depend on the press processes performed by the winemaker, the thickness of the grape skin, and more. Now you know! Happy sipping!

Bonus fact: assuming the figures listed above are correct, it takes roughly 120,000 grapes to fill a single barrel. It's worth it.

The Eve of Harvest 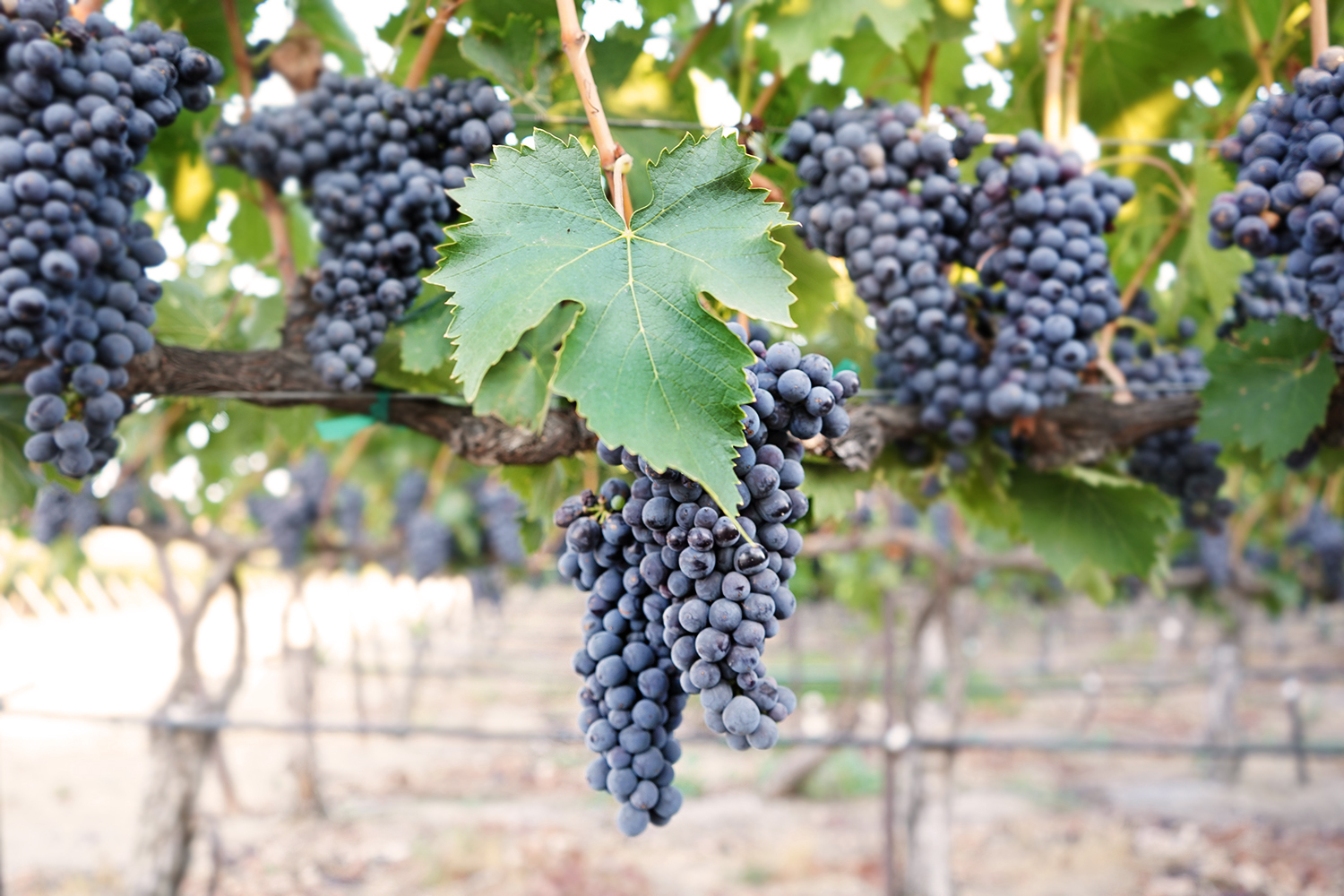 Each morning, the Estate is holding its breath. Any day, the harvest will begin and our winemaker and his team will begin their labor of love, transforming the bounty into the wines we will enjoy for many years to come. The vines are full, ripe, and almost ready. As shown above, clusters in our Riserva Sangiovese block ripen to perfection. Below, Sauvignon Blanc grapes glow in the first light of the day. 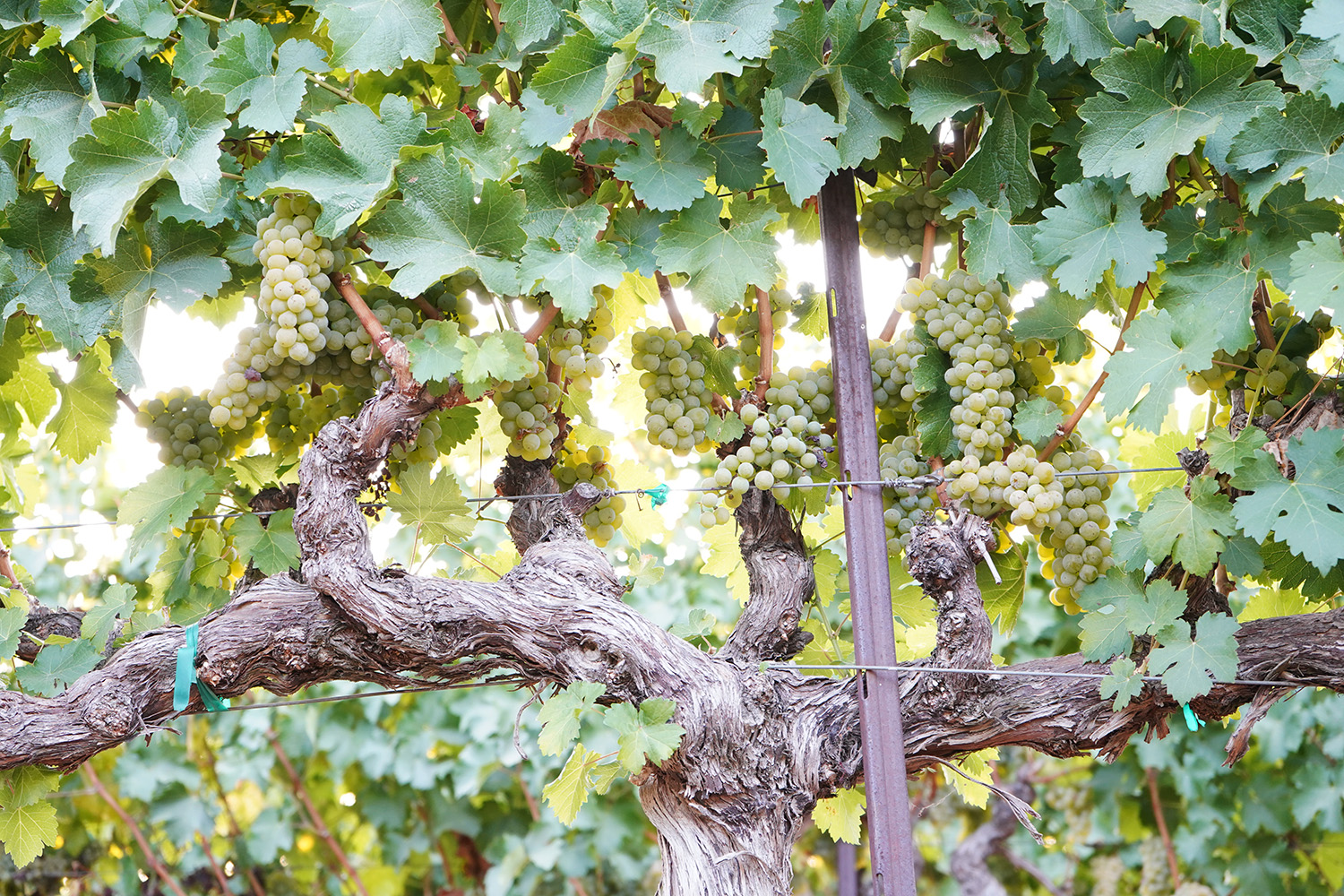 These gorgeous green-skinned grapes will find their way into our 2021 Fumé Blanc. 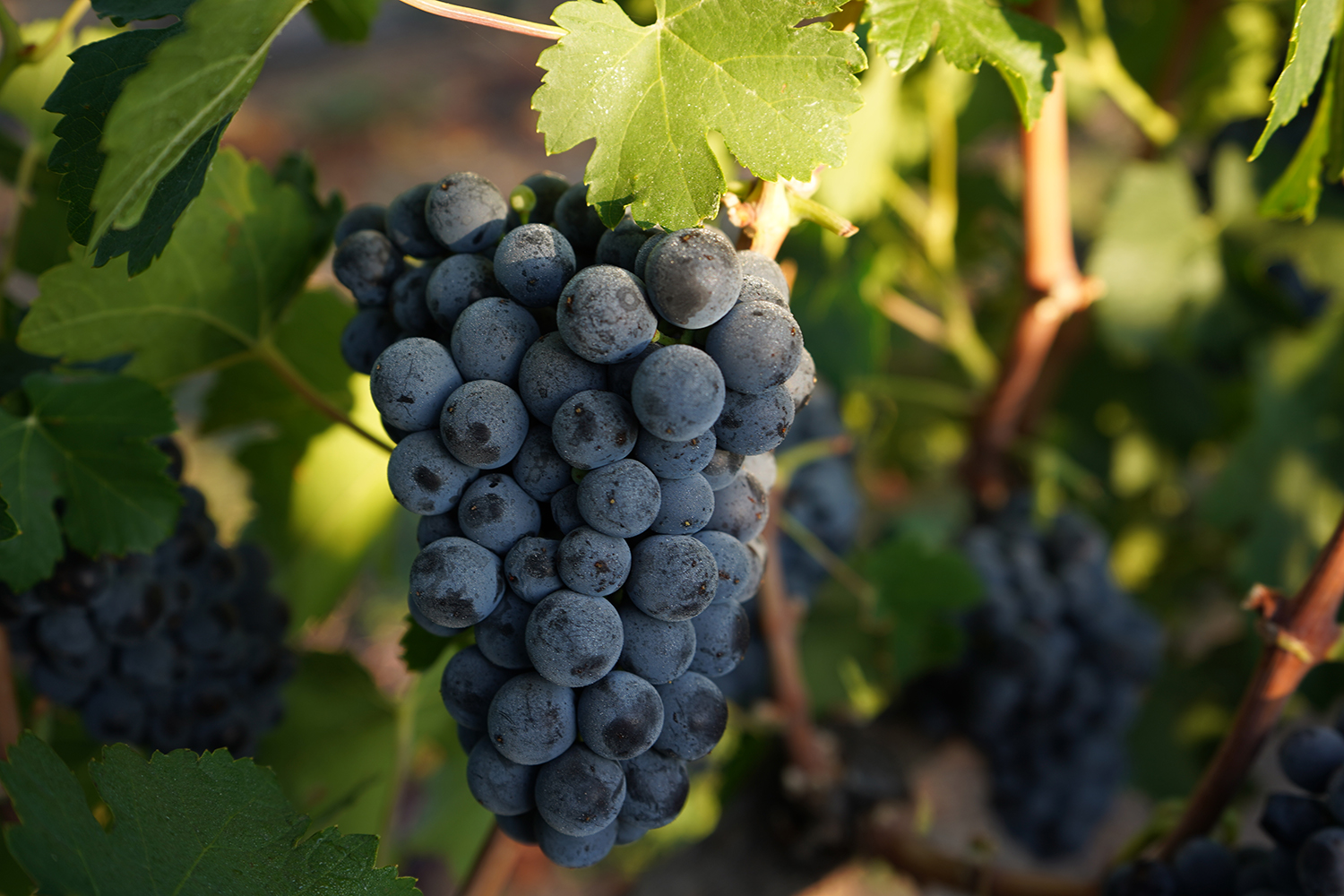 Here, the sunlight has not quite evaporated the dew that lingers from the morning's fog on a promising cluster destined for our Riserva Petite Sirah. 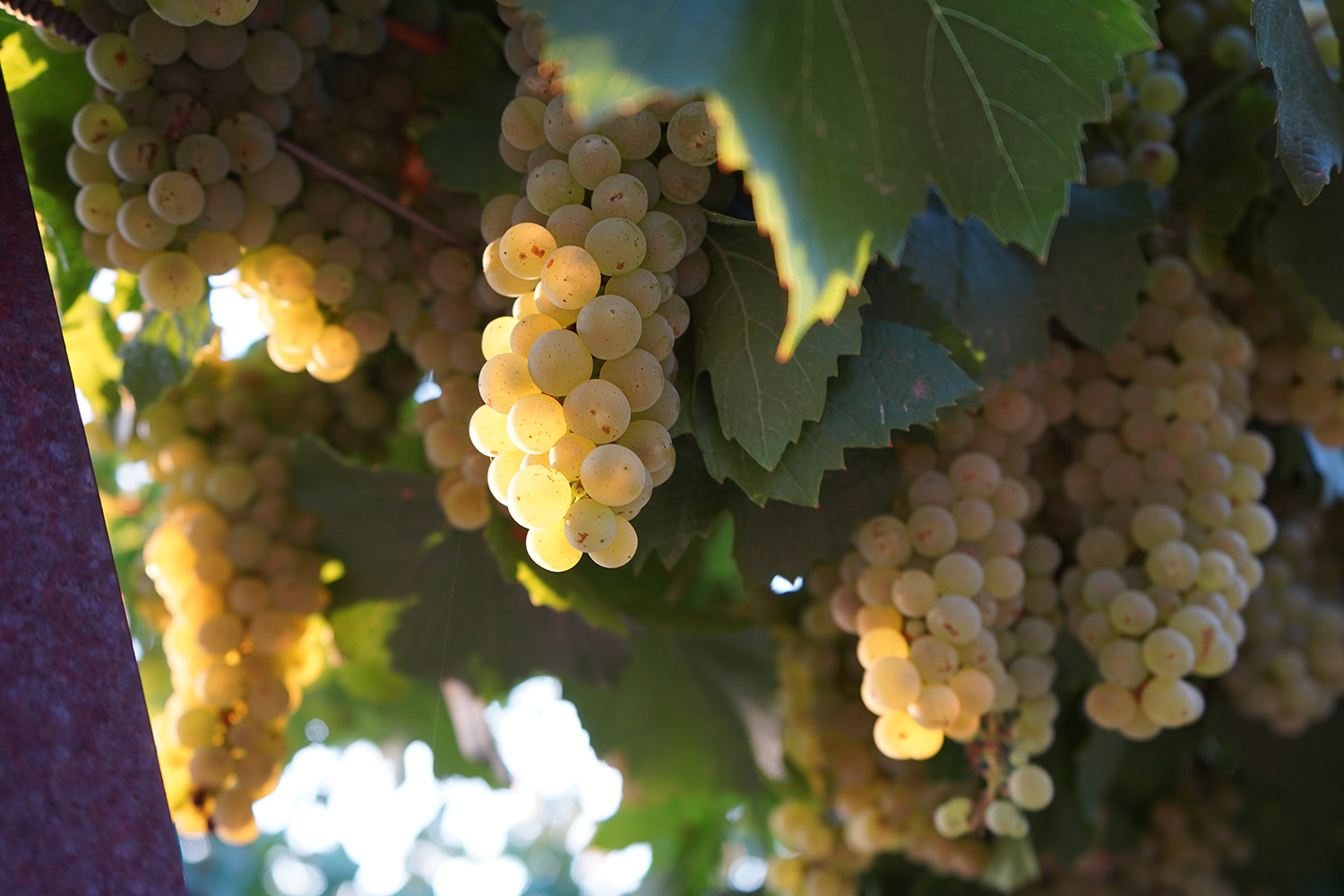 The sunlight graces our Chardonnay with a breathtaking golden glow in a way that we can't help but look forward to the beauty of what the bottles will hold. 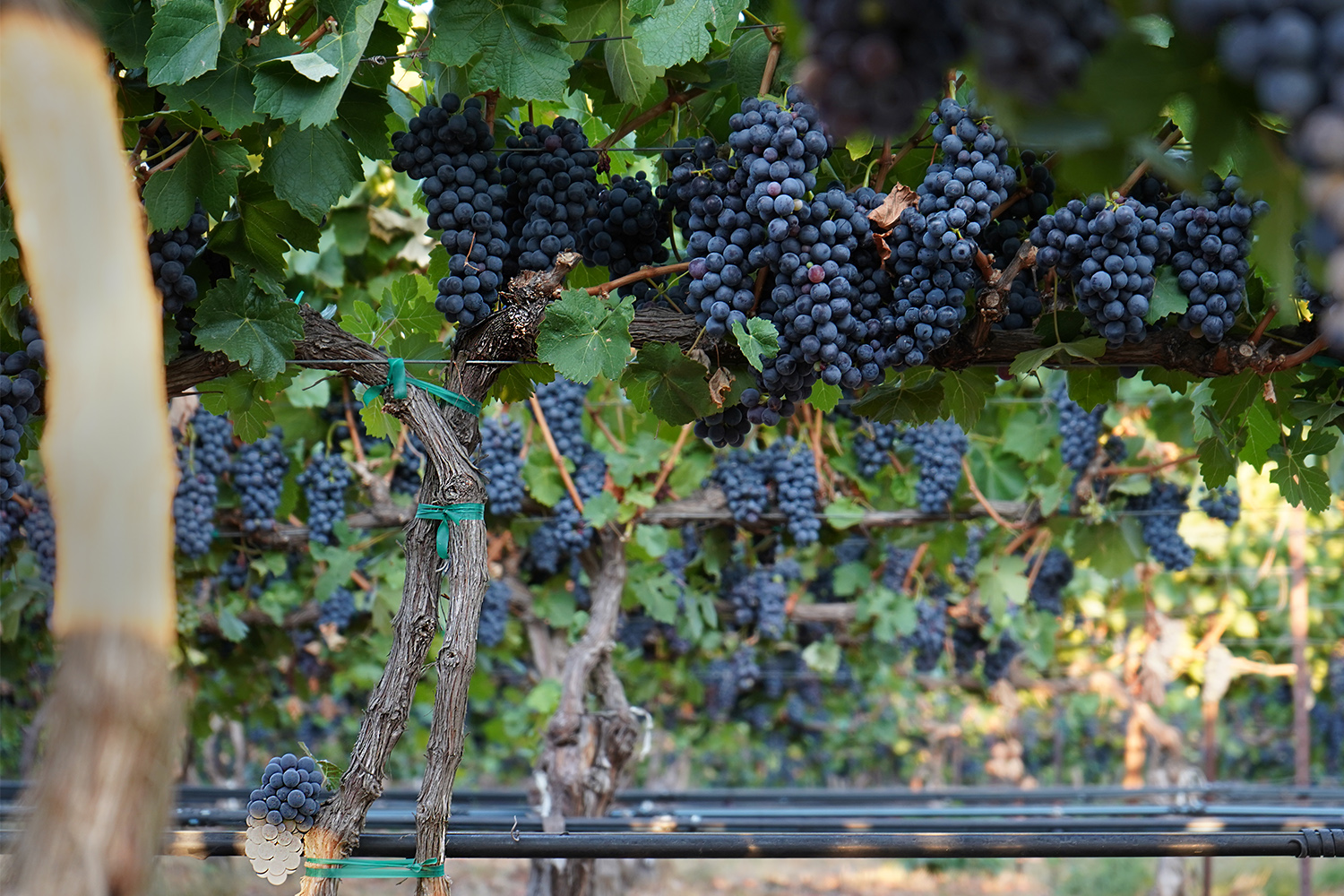 Our Riserva Barbera is fruitful and picturesque, perfect for nature lovers and wine lovers alike. 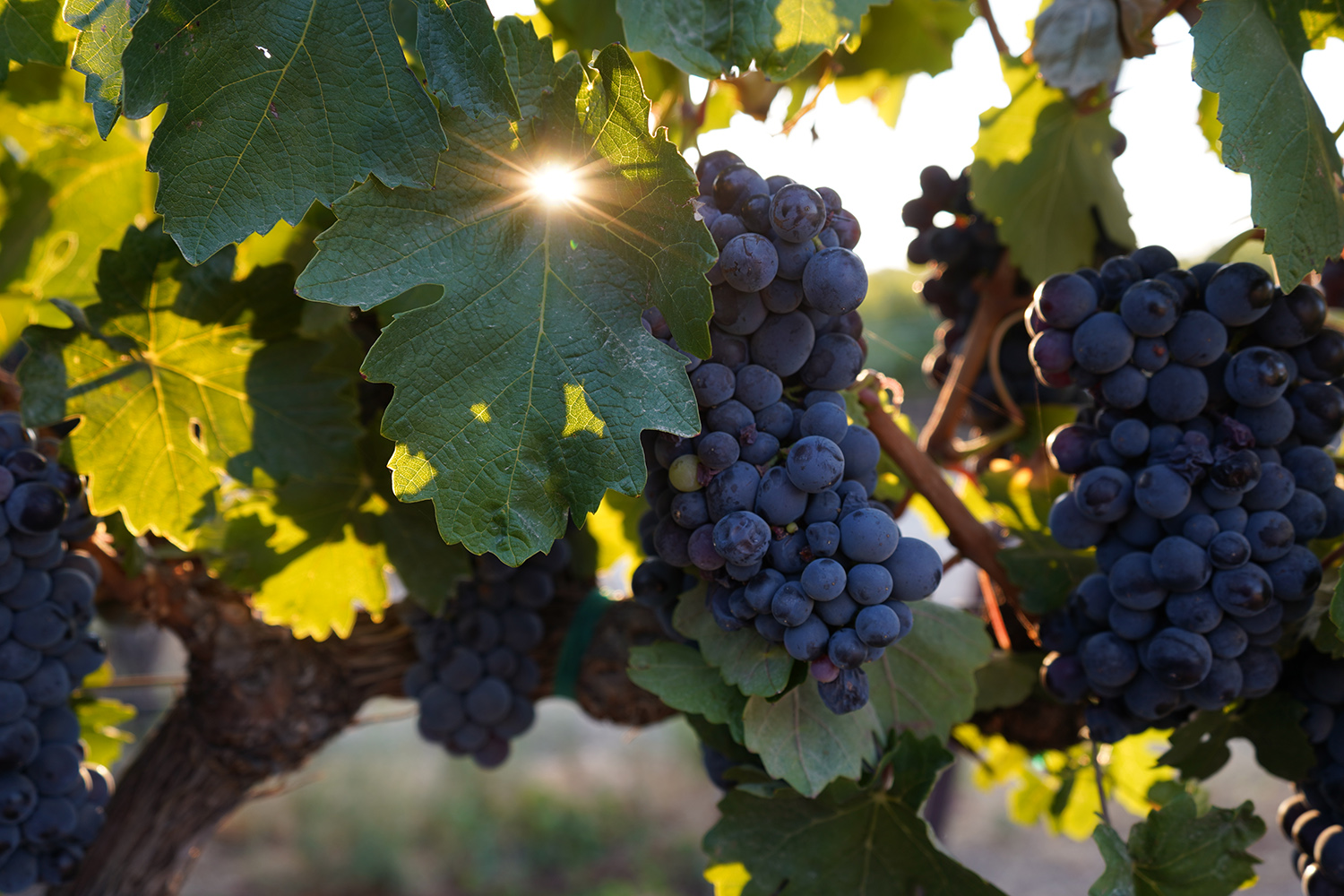 In our Landmark Barbera block, the sun peeks through and begins to warm the air and bring on the day. The deep purple fruit continues to mature, growing ever closer to harvest time. 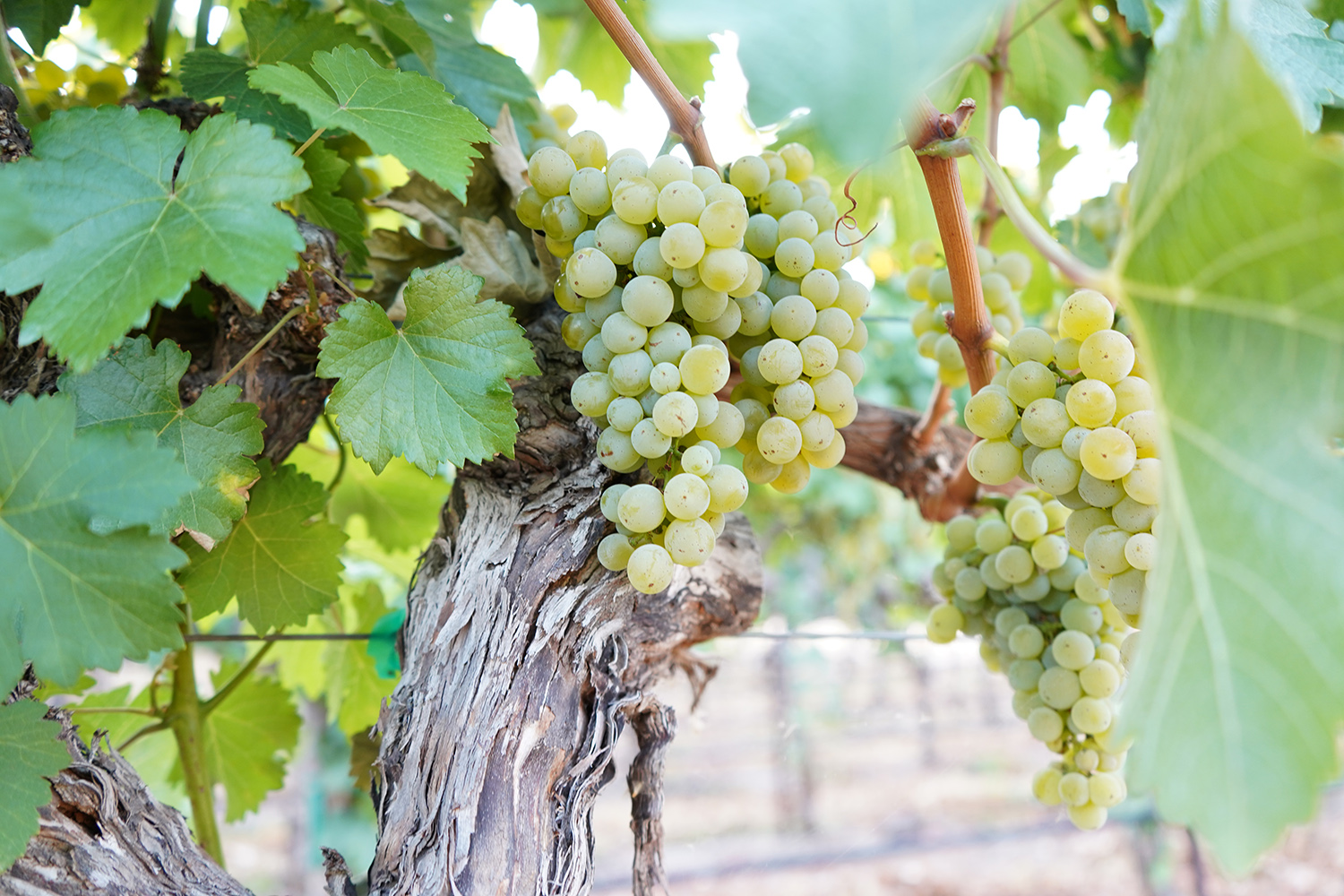 Our winemaker has closely monitored every facet of the vineyard and predicts that our Sauvignon Blanc grapes will be ready first, even within the next few days. Fumé Blanc lovers, rejoice! 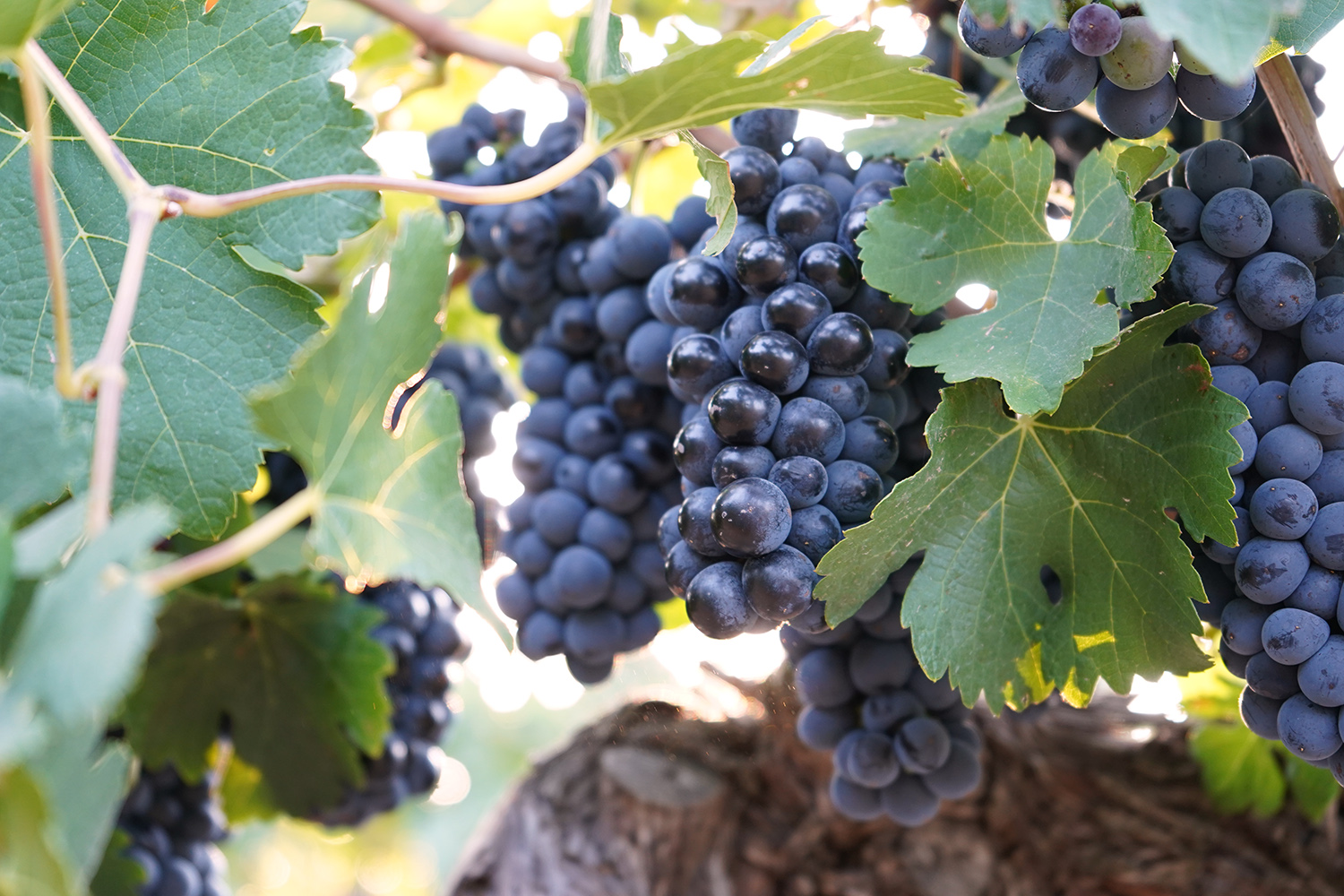 Meanwhile, our Riserva Cabernet Sauvignon is patiently ripening into a gorgeous dark hue, ready to be appreciated by wine lovers of all kinds.

The vineyard has an uncommon type of beauty in this season. If you would like to see it up close, perhaps you'll love our Duck Tour—click here for details.