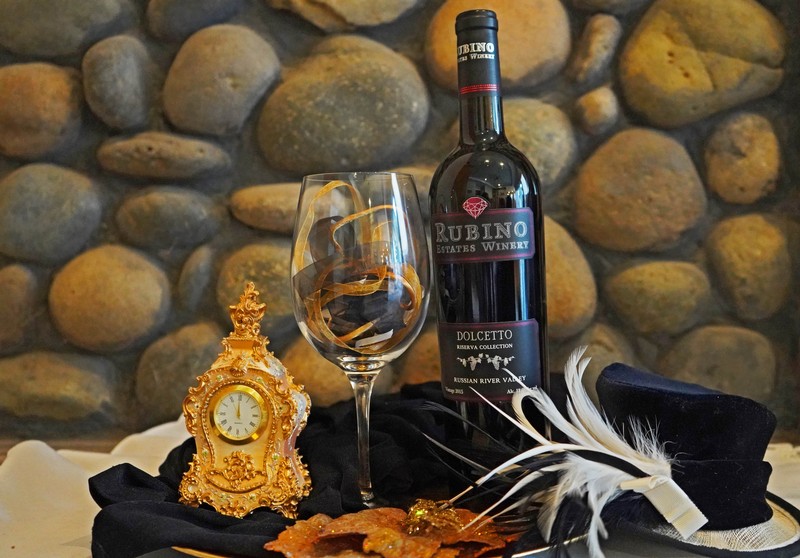 As 2020 winds down, we have found ourselves prompted to reflect on the wild year we've had. As of now, the vines are bare and the tasting room is empty, but our hearts are full. We are thankful to every member and patron who has supported us this year. Now, as we anticipate 2021, we're looking for cheery ways to say "addio!" To do this, we've collected up some stay-at-home friendly New Year's Eve traditions from cultures around the world, which is perfect for those of us who have missed travelling this year.

In Spain people eat a dozen grapes, one at each stroke of the bell at midnight, symbolizing their hopes for the months ahead. Since the tradition began in the late 1800s, it has become integral to the celebration of the New Year in Spain. Las doce uvas de la suerte, "The twelve grapes of luck" are often eaten around the table with one's family to usher in a year of luck.

In the Southern United States, many people lean into the lore that black-eyed peas bring good luck in the year to come. These legumes are often eaten in the form of a dish called Hoppin' John, which also incorporates rice and pork and is served over greens. Though the origins of this tradition are cloudy, the dish is thought to celebrate emancipation, endurance, and expanding wealth.

In Cuba, a roast suckling pig is the delicacy of choice to celebrate the New Year, since the richness and natural fattiness are said to represent the promise of plenty in the year to come. In other places where pigs represent prosperity, such as Germany, Austria, and Portugal, pork appears in New Year dishes in various forms.

In Japan it is common for people to write nenga or New Year's greetings to loved ones, similar to the western tradition of Christmas cards. As this tradition has modernized, these greetings are often written as postcards, and are called nenga-hagaki. These cards originated as early as the 5th century, and were meant as a substitute for face-to-face new year's greetings, which we think is perfect for this year.

Nordic Countries such as Sweden, Finland, and Norway, meanwhile, prepare some form of creamy spiced rice pudding with a single blanched almond hidden inside. This dish is served over the holidays, and it is said that whoever finds the nut in their dish can expect a year of good fortune. Some families also prepare a small prize for whoever is lucky enough to find the almond!

In Brazil, people traditionally wear white on New Year's eve to represent purity and peace. Our favorite tradition, though, is to drink Sparkling Wine to represent being energized throughout the next year! Since the beverage is made from grapes, Brazilian culture connects this bubbly treat to prosperity and life.

New York City captures the attention of the world on New Year's Eve by dropping of a giant ball in Times Square at the stroke of midnight. This tradition began in 1907 and has continued almost every year. As of 2020, the Ball (which is technically a "geodesic sphere") is 12 feet in diameter and weighs 11,875 pounds. This year, the event will be exclusively over live broadcast.

We hope we've given you some fun ideas for celebrating the end of this year. Now is the time to ask: what are you drinking New Year's Eve? We recommend a glass (or two) of your favorite Rubino Estates wine as you welcome the New Year in your own style.